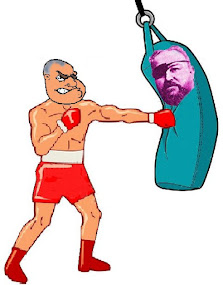 Everybody has heard of Richard Teichmann (December 24, 1868 - June 15, 1925). It is said he said, "Chess is 99% Tactics," but I was unable to locate the source of where or when he said said quote. Also, it it hard to believe he said that seeing as how it was said of him, "His personality is calm, quiet, and thoughtful, so is his play, which persistently and surely follows a thought out plan, and he seldom endangers himself though precipitancy." Having said that, let us move on.
Richard Teichmann (24 December 1868 – 15 June 1925) was a German master known as Richard the Fifth because he often finished in fifth place in tournaments. The major exception was Carlsbad 1911, where he finished first a full point ahead of Akiba Rubinstein and Carl Schlechter both of whom he defeated. Capablanca called him one of the finest players in the world.
Perhaps it was because of the fact that Teichmann was on the receiving end of his share of brilliant combinations that he coined his famous maxim. Still, even though he had minus scores against Emmanuel Lasker (+0-4=0) and Capablanca (+0-2=1), against the greatest tactician of them all, Alexander Alekhine, Teichmann scored a credible result: three wins, five losses and five draws.
When World War I broke out it coincided with the peak of Teichmann's power and he was forced go take a 7-year hiatus from 1914 to 1921. Between August 1906 and May 1912 the Chessmetrics site estimates his rating to have been over 2700 and on 19 different months between those dates he was ranked 5th a total of 19 times. Richard the Fifth all over!
Upon his resumption of tournament play he managed only a few more events before passing away in 1925 due to kidney and heart problems. At the time of his death Chessmetrics puts his rating at a respectable 2574 ranking him 17th in the world.
Teichmann was born in Lehnitzsch Sachsen-Altenburg, Germany. He was a student of languages and was fluent in several of them. He moved to England in 1892 as a language teacher and resided there for a number of years.
At London 1899 (won by Lasker ahead of Maroczy, Pillsbury and Janowsky who all tied for second), Teichmann had defeated Samuel Tinsley, lost to Chigorin and drawn with Pillsbury and Blackburne when an eye infection forced him to withdraw. He lost the use of his right eye and thereafter wore his signature eye patch.
His opponent in the following game was Rudolf Loman (1861-1932, 71 years old) of The Netherlands. On July 31, 1893 a match (the best out of nine games) between Loman and Teichmann was commenced at Simpson's Divan in London.
The first game was a draw, but the second and third were wins for Teichmann. At that point Loman left for a vacation in Holland and to take part in the Dutch National Tournament at Amsterdam. As a result, the match was to be resumed in the middle of September. Upon resumption Teichmann scored +5 -0 =1.
In this game Teichmann was the puncher and succeeded in landing heavy blows on the hapless Loman.