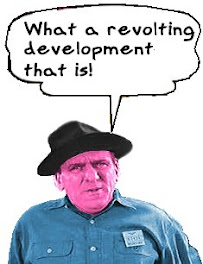 Older American players may remember "What a revolting development that is!" as being the catch phrase of the blundering Chester A. Riley, from The Life of Riley, a radio show from 1944-1951 and a television show from 1949-1950 and 1953-1958. The radio series and the second TV series starred William Bendix as Chester A. Riley, a wing riveter at the fictional Cunningham Aircraft plant in California,
Chess players regardless of race, color, national origin, religion, sex, sexual orientation, gender identity or transgender status, age, disability, marital status, political affiliation or status as a parent can identify with the phrase when it comes to making a gross blunder or letting a won game slip away into a loss.
Who hasn't built up an overwhelming position with a huge material advantage or a robust attack, but the opponent stubbornly refuses to roll over and die? Or, our opponent makes a surprising sacrifice that may or may not be sound. Or, we just start drifting and at some point realize our advantage has all but evaporated.
Frank Marshall, who has been featured in a couple of recent posts, once wrote that "Winning a won game is the hardest thing in chess." It's not always easy to finish off an opponent and make them resign. Why is that?
First of all, when you have huge advantage there is often a tendency to think the game will be over shortly and that our opponent will soon resign. As a result we can end up overlooking a resource at his disposal, either obvious or hidden. And, when he plays it, it comes as a shock that leaves us shaken.
IM Jeremy Silman wisely observed that there are times it's a good idea that instead of trying to utilize one's advantage straightway, it may be wise to take time to curtail the opponent's counterplay before proceeding with one's own plans. He notes that amateurs often get a permanent advantage like extra material or some static advantage and then spoil their position by trying to force the issue. He recommends that first your position should be solidified and any chances for counterplay snuffed out before proceeding because a static advantage isn't going to go away.
Another reason for not winning a won game is our failure to realize exactly what our advantage consists of, or if we do know, not understanding how to take advantage of it. Then, too, sometimes a position can be tricky because it may appear that there are more than one or two roads to victory...and one of them might be wrong.
Yet another problem is fearing ghosts. One time I won a N early in the opening against a 2500+ IM and had an easy win. But then I started seeing threats that were not threats at all...they only existed in my mind. The result was that I lost the piece back and after that we were back on equal footing and I don't have to tell you the result. 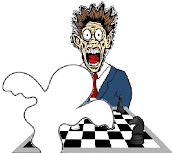 We are not out of reasons for failing to win won games yet! Average players have a poor knowledge of endings if they have any knowledge of them at all. All the experts tell us that there are several theoretical endgames that we simply must know, but few of us- listen.
Then there are miscalculations where we simply miss something and don't realize it until it's too late. Finally, there is always the gross blunder where we just hang a piece or overlook a one move mate.
In My Great Predecessors, Kasparov titled a chapter about Mikhail Tal as Bluff as a Weapon of Victory. Tal probably sacrificed more pieces and took more risks than anybody, but as Averbakh noted, Tal's opponents always had a win, but for some reason only in the analysis after the game. But, that wasn't always the case.
When Tal met Tigran Petrosian in round 8 of the Candidates tournament in Willemstad, Curacao in 1962, Tal played the most terrible game of the whole tournament.
In this game Tal didn't lose a won game because he never had one, but his play is a reminder that even the best players in the world are human and gross blunders can happen to anybody.
At the start of the game he left the well trodden paths of opening theory, but in a way that did not inspire confidence. Tal wrote that at move 8 he spent an hour trying to decide on two reasonable moves, both of which would give whim an advantage. Finally, he wrote down a move, then changed his mind and wrote down the other. By the way, two rounds later he played that move against Benko and won. A year later Spassky played the first move against Petrosian and also won.
Tal wasn't done writing down moves though. Because he couldn't make up his mind which of the two moves was better he suddenly made a third move which he described as ridiculous (actually, it wasn't that bad).
After a serious mistake at move 16 he stood worse. At move 19 he made a gross blunder, but Petrosian missed the best continuation and while his advantage was significant, it was not absolutely crushing. It didn't matter because Tal was having such a bad day that on move 20 he made another blunder and had to resign after Petrosian's reply.