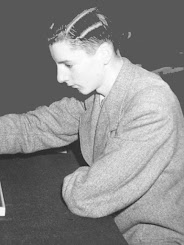 While browsing through a 1947 issue of Chess Review the other day I came across the name of British player Gordon Crown. I never heard of him so was curious as to who he was. It turned out Crown was a player of great promise who died just a few months after the issue was published.
Gordon Thomas Crown (June 20, 1929 - November 17,1947, 18 years old) was born in Liverpool, England. He learned to play chess at the age of nine and soon became a strong...real strong...player!
Noted for his exceptional knowledge of openings and understanding of the ending, he also had deep positional insight and excellent tactical ability. Add to that concentration, tenacity and determination to win and he was clearly Grandmaster material! Leonard Barden speculated that had he lived, Crown would have become a strong Grandmaster in the likes of Keres or Gligoric...a ringing endorsement!
He won the Lancashire Junior Championship three times in a row, was 2nd at the British Boys Championship in 1946 and in the 1946-47 Hastings Christmas Congress, at the age of 17, he won the Premier Reserves Group B. In 1947 he won 3rd prize in the British Championship and in September of that year he played 4th board for Britain in the match against Russia and scored a win and a loss against Alexander Kotov. That's pretty impressive since Chessmetrics puts Kotov's rating on the December, 1947 list at 2714 ranking him ninth in the world. 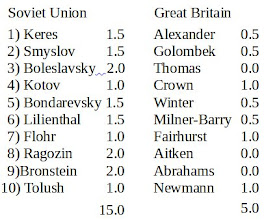 In September 1947, the 18-year-old Crown, who was a diabetic, complained of a stomach ache and was rushed to hospital where it was discovered that he was suffering from appendicitis and peritonitis; he died during the operation.

A Brilliancy Prize by Weaver Adams 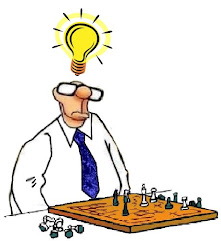 Brilliancy Prizes are throwback to the Romantic Era. According to the Oxford Companion to Chess, the first beauty prize in was awarded in 1876 to Henry Bird for his win against James Mason at “The Clipper Free Centennial Tourney” that was held in New York to commemorate the centenary celebrations of the United States Declaration of Independence.
I am not sure how the brilliancy would hold up under the scrutiny of Stockfish, but does it really matter? I read that back in 1925 some Russian professor named A. Smirnov wrote that the importance of the underlying soundness of the game (was by then) deemed essential and flawed play, imaginative though it might be, no longer (passed) muster.
Reti wrote that tactics represented the triumph of mind over matter. The combination, the sacrifice, the unexpected move imbue the wooden pieces with sparkle, almost make them come to life.
Emanuel Lasker once wrote in an annotation that one Bishop smiled while the other Bishop laughed. Reuben Fine added that unless there was a tactical sequence, it was silly to invoke such human attributes.
Because the sacrifice is prized so highly, it used to be customary to offer special awards for them. Like postal play, engines have pretty much thrown cold water on them.
What are the requirements for the brilliancy prize in this day of Stockfish and Dragon by Komodo? A brilliant game still has to contain a sacrifice, preferably one that's not obvious, and it should be pleasing to the eye. The catch is that it has to be sound as shown by an engine. In spite of all that, tactics by players like Nezhmetdinov, Spielmann, Alekhine, Keres, Tal and others are still fun to play over, sound or not.
Weaver Adams, playing his usual spectacular chess, won the brilliancy prize at Ventnor City in 1943, but more about that anon.
Anthony Santasiere and George Shainswit, then serving in the Army Medical Corps, shared first at the fifth annual Ventnor City Invitational Tournament held on the Municipal Pier of the New Jersey resort from July 5th to 11th. New England Champ Weaver Adams finished a close third. 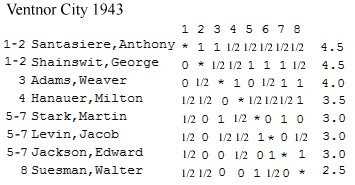 As mentioned in the previous post, Santasiere, at the time the Marshall Chess Club Champion, was a staunch advocate of brilliant, sacrificial play in word if not in deed. In his tournament he achieved success by avoiding losses rather than by winning games; he scored wins from Shainswit and Adams and drew the rest. Shainswit's loss to Santasiere cost him first place. At the time Shainswit had a reputation as a technician and being a drawing master, but in this tournament he surprised everybody by playing forceful chess,
Although his home was in Massachusetts, at the time Weaver Adams was living in New York doing engineering work at a war plant. He made history in this Ventnor tournament when he abandoned his beloved Bishop Opening which he had been playing for years and switched to the Vienna Game which he now claimed to win by force.
Adams was a somewhat odd fellow. No matter what was happening on the board, he always appeared calm and unperturbed and if his position became difficult he would just lean back in his chair with nonchalance.
Often, while seated at the board he seldom looked at or even seemed aware of his opponent and frequently turned his chair at a right angle to it and when not gazing at the board, he stared out of the window for a long time. On occasion this unnerved opponents who sometimes complained to the TD about it.
Adams played his own way, using his own published analysis, often to his detriment. When he finished next to last at Hastings in 1950 it was in no small part to his having armed his opponents with advance knowledge of his best lines.
Because of his dogmatism and his style, Adams was just as likely to be on the winning or losing end of a brilliancy prize game. At this Ventnor tournament he won the brilliancy prize for his win over Walter Suesman, but he also was on the receiving end of the best played game award which went to Martin Stark for his sparkling win over Adams!

Robert Willman won the 1950 New York State championship in one of the strongest fields ever to have competed for the title up to that time.
One point behind and tied for second and third places were Anthony Santasiere and Jack Soudakof. Fourth place went to Dr. Walter Cruz, champion of Brazil in 1940 and 1938, who was in the U.S. doing medical research work at a hospital in Rochester, New York.
Almost nothing is known about Robert Willman except that prior to winning this tournament he had tied for first place with with Abraham Kupchik in the 1932 Manhattan Chess Club Championship, but lost the playoff. He won the club championship outright the following year. Also in 1933, he played a match against Albert C. Simonson and won by a score of 5.5-4.5. Willman was one of the reserve players for the US in their 1945 radio match against the USSR.
A Chess Review article on the tournament stated that Willman was born in New York City, was resident all his life, and made his living as an insurance claim agent. He held two college degrees: an A.B, from the City College of New York and an A.M. from Columbia University.
He was born on January 3, 1908 and according to chess historian Jeremy Gaige, Willman changed his name to Williams and died on December 30, 1978.
The following game, which was played in the Championship which held at Colgate University in Hamilton, New York between Blumin and Santasiere, is an example of carrying out a deadly attack without Queens. 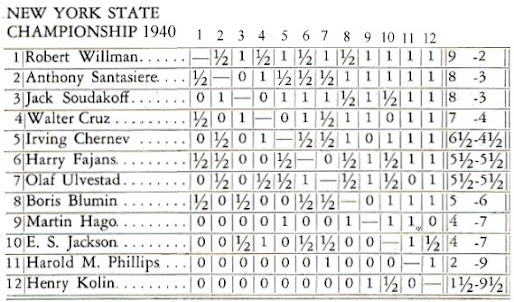 Boris Blumin (January 11, 1908 - February 16, 1998), a Canadian-American master. Born in Russia, he emigrated to Canada, where he played in several Canadian championships. He was Canadian champion twice, winning at Toronto 1936 and Quebec 1937. He was a five-time winner of the Montreal City Championship (1933–1939). In August 1939, he moved to New York City.
Anthony E.Santasiere (December 9,1904 - January 13, 1977) was a master and chess writer, who also wrote extensively on non-chess topics. He won the 1945 U.S. Open, four New York State championships, and six Marshall Chess Club championships. He also competed in four U.S. Championships, with his best finish being a tie for third in 1946.
Santasiere was born and raised in New York City, the 12th of 13 children, and grew up in extreme poverty. He graduated from City College with a degree in mathematics. His studies there were financed by Alrick Man, a wealthy chess enthusiast who had served as president of the Marshall Chess Club. Following graduation, beginning in 1927, Santasiere taught mathematics at the Angelo Patri Middle School in the Bronx, and held that position until he retired to south Florida in 1965.