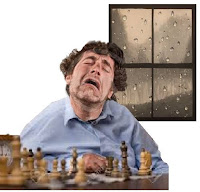 To paraphrase writer and musician Daniel Handler, what a bad day it was, the clouds were low and the rain no fun, and the dark as it hit the late afternoon, was thick like someone who stops by your place and just won't leave. The day was canceled, almost, on account of the rain spilling itself over everything.
Weather has an effect on chess activities, both physically and mentally. Back on December 6, 2013, the USCF issued a warning that in light of the severe weather conditions and forecasts in many parts of the country players should check on a tournament's status and the road conditions before attending events over the weekend. The announcement was necessary because in December of 2013, it was very snowy and cold across the northern US and a large winter storms brought heavy snows in some states.
Actual hurricanes don't reach where I live, however some strong ones are capable of reaching the state with residual high winds and heavy rain. Back in 2008, the effects of Hurricane Ike caused widespread damage, not including Louisiana and Texas where it made landfall, but across Arkansas, Illinois, Indiana, Kentucky, Michigan, Missouri, New York, Ohio, Pennsylvania, Tennessee and West Virginia and into parts of Ontario, Canada.
I live some 1,300 miles from where Ike made landfall and some parts of my state had wind gusts of over 75 mph which is equivalent to sustained wind levels found in a Category 1 hurricane. Power outages, some lasting two weeks, were widespread in the southern part of the state and one fifth of the state's corn crop was lost. In my city a young boy was killed when he was hit by a falling tree limb and in the park around the corner from us quite a few diseased oak trees were blown down.
Hurricane Zeta made landfall near Cocodrie, Louisiana on Wednesday afternoon as a Category 2 storm with 110 mph winds. I live 1,160 miles from there and yesterday (Thursday) was an unproductive day...it was cold, dark and miserable as the northern edge of Zeta was passing through and brought 16 hours of rain and cold with temperatures hovering around the upper 40s. 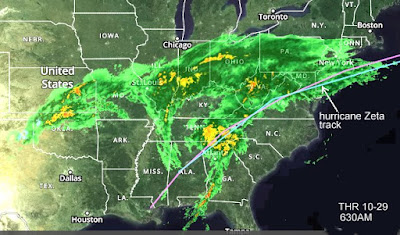 As you can see on the map, the rain stretched from Amarillo, Texas to New York City, a distance of 1,550 miles and it was cutting a swath over 600 miles wide with a tail extending hundreds of miles more down into the Gulf of Mexico.
According to a paper about the effects that weather anomalies have on intellectual performance, weather influences human biorhythms that can affect chess players. Read more...
Another paper examined the effects of indoor air quality and temperature and how they affect the performance of tournament players. Read more...
In spite of everything, to quote actress Jane Lynch, "You can't make a cloudy day a sunny day, but you can embrace it and decide it's going to be a good day after all." Like many things, it's easier said than done. Most people don't look forward to Mondays, but at least the promise is for warmer weather (low 60's) and sunshine.
Posted by Tartajubow at 12:44 PM No comments: 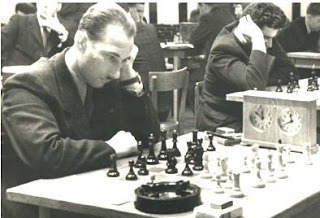 Meteorologist Lev Aronin (July 20, 1920 - October 4, 1982) was a Soviet IM who deserves to be better known, but in his heyday which was in the 1950s, he had the misfortune of being too old to be considered a promising young player plus he was stuck behind a bevy of elite Soviet players who dominated the world's best list. As a result he never got selected to play abroad.
He played in eight USSR Championships, which in his day were stronger than most international tournaments. He was awarded the IM title in 1950. Chessmetrics estimates his highest rating to have been 2674 in 1952 which put him at number 22 in the world...easily Grandmaster material.
Aronin was the youngest of three brothers, with Gregory (1913–2007) being the eldest, and Efim (1915–1989) being the second. Gregory taught him chess at the age of 8. Lev won the Kuybyshev city championship in 1937 and gained the title of First Category (i.e about 2000-2125).
In 1938, he entered the Moscow Pedagogical Institute where and began playing in norm tournaments. By the end of 1940 he had obtained the title of Candidate Master (2125-2250).
In August 1941, he was drafted into the Soviet Army and was unable to devote any time to chess until the end of 1944. At that time one obtained the title of Soviet Master by winning a match against an established master. Aronin challenged Aleksandr Konstantinopolsky, but was defeated convincingly; he lost the first six games (!), but bounced back to win one and draw five.
At Yerevan in the summer of 1945, he took first place in the All-Union Championship of First-Category players and in the spring of 1946, he won a Candidate Masters tournament. Later that year, in October, he tied for second in the 15th USSR Championship Semi-Final scoring 11-6 and fulfilled the norm of Master of Sport of the USSR.
In 1946, at Tbilisi, in the USSR Championship semifinal, Aronin tied for second place and thus qualified for a place in his first Soviet final, held in Leningrad in 1947. There he scored 7-12 and finished tied for 17th–18th place.
Aronin had a number of major success in 1947 and 1948, but it wasn't until 1949 when he scored 10-9 to finish 9th in the super-strong final of the USSR Championship that he could be considered to have reached the elite level. Chessmetrics estimates his performance rating in that tournament to have been 2636 so his +1 score indicates just how string the tournament was. Smyslov won followed by Bronstein, Geller and Taimanov.
Moscow 1950 (18th USSR Championship) was the high point of his career as he scored 11-6 and tied for 2nd–4th places behind Paul Keres. Bronstein said Aronin's style reminded him of Botvinnik's: very positional and safe but using his tactical talent only when the position called for it.
The following game is from that 18th Soviet Championship. Fifteen of the Soviet Union's best masters and GMs qualified from five semi-final tournaments held earlier in the year.
Aronin, Victor Liublinsky, and Tigran Petrosian qualified from Gorky. Vasily Smyslov was returning Soviet champion. Mikhail Botvinnik and David Bronstein were preparing for their upcoming world championship match so what would have been their invitations went to 1947 USSR championship winner Paul Keres and world candidate semi-finalist Isaac Boleslavsky.
The Championship was dedicated as a memorial to Mikhail Chigorin's 100th birthday. The field was exceptionally strong and the results of Smyslov, Geller, Boleslavsky, Flohr and Petrosian were surprising as were the results Aronin, Lipnitsky and Tolush. 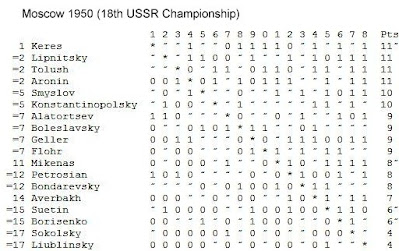 Aronin's opponent in this game, GM Alexander K. Tolush (1910-1969) was an imaginative attacking player who was one of Boris Spassky's mentors. He was born and died in St. Petersburg (in 1969 called Leningrad). He was also a correspondence IM.
The game was filled with tactical possibilities and it was the tactician Tolush who was on the receiving end of most of them! 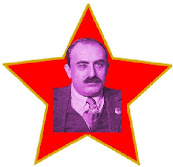 Walter Goldwater (1907-1985, 77 years old) was an antiquarian who founded University Place Book Shop in Manhattan, part of what was once known as "Book Row." He was a co-founder and publisher of Dissent magazine (a left-wing intellectual magazine). He also collected and wrote about collecting Incunabula (books published before 1501). He was also a founding member of the Antiquarian Booksellers Association of America.
In 1932 he opened his book shop at 12th and Broadway in Manhattan with $600 and the help of ''a Communist uncle by marriage.'' The bookstore specialized in African, African-American, and Caribbean (West Indies) literature as well as used, old, and rare books. Other specialties included chess, Russia and radicalism. Bobby Fischer was known to purchase chess books there.
Goldwater was born in Harlem, New York. His physician father, Dr. Abraham Goldwater, was a radical and knew many prominent black activists which likely explains Goldwater's specialty in books on black studies.
In those years, the area housed dozens of book stores and constituted the city's center for second-hand books. Sidewalk stands in front of the shops were piled high with bargain books and rare books were found inside. Over the years, rising rents and changes in the book business forced most of the booksellers to close, but Goldwater hung on to the end.
He was a decent chess player and at the time of his death he was president of the Marshall Chess Club. He was also the guiding spirit of the annual Goldwater-Marshall invitational tournaments held at the Marshall Chess Club, often paying for the prizes out of his own pocket. His other main other interest was tennis, which he played more often than chess. Goldwater claimed that he knew hundreds of chess players and dozens of tennis players who could beat him, he never met anyone who could beat him at both.
He graduated from the University of Michigan and initially took clerical jobs to support himself. In 1930, he joined International Publishers, the most prominent communist publishing organization in the United States."
In 1931, Goldwater and his wife Ethel, who had joined him in studying Russian, traveled to Moscow where they helped set up the Cooperative Publishing Society of Foreign Workers. Both then worked there as translators and editors. Goldwater was a critic of Stalin, which landed him in trouble with authorities and they had to return to New York in early 1932.
Around 1932 or 1933, Whittaker Chambers tried to recruit Goldwater to open a bookstore near Columbia University to serve as a meeting place for Communist (Soviet) underground agents as well as mail drop.
Whittaker Chambers (born Jay Vivian Chambers; April 1, 1901 – July 9, 1961) was an American writer-editor. Chambers became a Marxist and, in 1925, joined the Communist Party of the United States then known as the Workers Party of America.
Chambers was recruited to join the communist underground and began his career as a spy. Later he defected from the Soviet underground and worked for Time magazine from 1939 to 1948. Afterwards, he worked as a senior editor at National Review (1957–1959).
As for a bookstore to be used as a Communist gathering place, Chambers checked with the Communist Party USA and they rejected the idea because they were suspicious of him.
Goldwater willed his University Place Book Shop to a long-time employee who ran the shop from 1985 to 1988. The store closed in 1995, due to rising costs and a debt of $64,00 0 in unpaid rent.
Goldwater often competed in New York tournaments and here is his win against Harry Fajans in the 1943 Marshall Chess Club Championship. Here is a game from the 1943 Marshall Chess Club Championship in which Goldwater defeated Harry Fajans (May, 1905 - November, 1986, 81 years old), a USCF Expert (2000-2199) and a fixture in New York chess for many, many years.