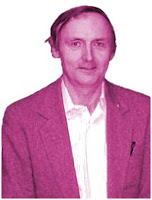 Here is an exciting game by Soltis against Argentina's Miquel Quinteros. As Soltis explained in Confessions of a Chess Grandmaster: "What happened in this game is that Quinteros has been repeatedly victimized by his own Achilles heel, an impractibility that often leads him to grab pawns he shouldn't and defend positions without a sense of danger."

Let's Talk About the de la Bourdonnais vs. McDonnell Matches 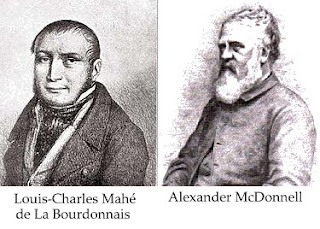 At the time all the world, at least all the chess world, knew about the encounters of de la Bourdonnais and McDonnell. In 1834 the two hammered away at each other in a series of six (!) matches that confirmed that de la Bourdonnais was the leading player in the world. There wasn't any such thing as a World Champion at that time, but unofficially it had to be de la Bourdonnais.
de la Bourdonnais was considered the world's leading player from 1821, when he surpassed his mentor Alexandre Deschapelles. In 1823 La Bourdonnais defeated William Lewis, Britain's leading player, in a match in London, and in the spring of 1825 he played and defeated the best players that England had to offer. Nine years later he returned to London when a challenge was issued on McDonnell's behalf.
Between June and October 1834 the two played a series of six matches, a total of eighty-five games, at the Westminster Chess Club in London. Play generally began around noon, some of the games taking more than seven hours to complete.
After each game, McDonnell would return to his room exhausted, where he would spend hours pacing back and forth in a state of nervous agitation. Meanwhile, de la Bourdonnais would be downstairs regaling himself at the chessboard where he would continue to play till long after midnight, smoking cigars, drinking punch and gambling.
The two were evenly matched in their abilities, but wildly contrasted in their styles of play. de la Bourdonnais was known for the rapidity of his play, often replying to his opponent's moves within seconds, whereas the McDonnell sometimes took as many as two hours to make a single move. But despite his deliberation, McDonnell was a reckless player whereas de la Bourdonnais was always cautious. McDonnell's penchant for wild and often ill-considered attacks told against him during their matches.
The personalities of the two men were also different. de la Bourdonnais was an ebullient and garrulous individual. When winning, he grew talkative and affable; but when things went against him, he "swore tolerably round oaths in a pretty audible voice." McDonnell was taciturn and imperturbable. Winning or losing, he showed little emotion which seemed to unnerved his opponent.
In the first match of the series McDonnell's lack of big-match experience told against him and he was heavily defeated by sixteen games to five, with four draws (+5 -16 =4). But he quickly recovered from this setback and went on to win the second match by five games to four (+5 -4).
Although the title of World Chess Champion was not created until 1886 (with Wilhelm Steinitz as the first champion), the world's leading players from earlier times are recognized today as unofficial world champions. La Bourdonnais is usually regarded as the champion from 1821 until his death in 1840.
It was about 1824 that Deschapelles retired and declared de la Bourdonnais his successor. Shortly afterwards, he traveled to England and took on the best the country had, but nobody could defeat him.
He paid his next visit to England in 1834, and most of the players he had met ten years earlier were gone or retired. The only possible challenger was Alexander McDonnell who was giving his opponents at the Westminster Chess Society the odds of at least a Pawn.
On the arrival of de la Bourdonnais everyone was anxious to see the two play a match. McDonnelI declared himself ready to play upon any terms and in any manner. And so a match Of twenty-one games (draws not counting) was arranged.
It is amusing to note that no care was taken to prevent spectators from pressing closely around the players. During the first games played McDonneIl especially suffered from the inconsiderate crowding around of spectators; for his part, de la Bourdonnais was comparatively indifferent.
How bad was the problem with spectators? Early in the match at one point when the two players were engaged in one of their most trying positions a spectator walked in and first shook hands with both of them and then leaned over, rested his hands between the pieces and surveyed the position and began asking questions. "Is this your first game today?" "The Rook seems in the devil's own mess." Unbelievably, neither player seemed too upset!
The final match was abandoned in obscure circumstances, but apparently de la Bourdonnais was forced to return to France to deal with his creditors. McDonnell was leading 5-4 at the time. It seems the players had a loose agreement to continue the match at a later date. but that never happened. 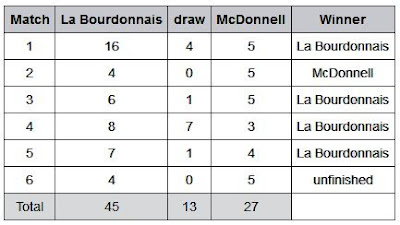 As for the games, while there were some instances of brilliance, Harry Golombek found them to generally be of low quality especially the endgame technique. In one game McDonnell had an endgame with a R+2Ps vs. a R and did not know how to win. To make matters worse, he blundered away his R and lost the game!
de la Bourdonnais was not as bad as McDonnell in the endgame but he was weak in the opening. There were relatively few draws, but this was partly due to McDonnell's inaccurate defense which caused him to lose games instead of draw them.
In the end, de la Bourdonnais was clearly the better player. He was a professional with greater knowledge and experience while McDonnell was a gifted amateur who had not encountered first class opposition.
One positive outcome of their match was similar to what happened over a hundred years later when Fischer met Spassky in 1972 and the result was the Fischer Boom where more and more people began to follow and study the game, they began visiting chess clubs and new stars appeared.
While Golombek was probably right about the overall quality of play, the following game is quite interesting and it has a few unexpected twists and turns. They may have played using a set like THIS one.