Way back in 1928 Henry Gross (1907 - 1987), a lawyer by profession, tied for first with A.J. Fink in the California State Championship, but lost the single game playoff. He won the championship in 1952 and the next year finished second behind Herman Steiner.
Because of his tie for first in the state championship, as a college senior in 1929, Gross was appointed the freshman coach of the University of California Chess Club; he was already making a name for himself in the California chess world at the age of 20.
Gross was from San Francisco and played at the famous Mechanics' Institute, but after passing the bar exam he got married, started a family and gave up chess for a period of ten years or so. After his divorce he married a woman who was bridge player and she had no objections to Gross' hanging out at the chess club, which in many cases also happened to be where the bridge club met.
When WWII ended Gross returned to the game and helped form the Golden Gate Chess Club in San Francisco. As one of the California State Chess Federation's first presidents Gross was an active supporter of chess organizations in California and he personally donated $1,000 (over $9,000 today) to help finance the 1961 US Open that was held in San Francisco.
The Pan-American tournament in Hollywood in 1954 was an exciting event with the lead changing hands from round to round. At the end of four rounds, Bisguier, Evans, Steiner and Rossolimo were tied at 4-0. In the fifth round Rossolimo took the lead.
After tenth round it was a tie at 8-2 between Bisguier, Evans, Rossolimo and Pomar who had steadily been climbing. Round 11 saw Evans and Pomar tied at 9-2, but both of them lost ground in the last three rounds and in the end it was Arthur Bisguier who prevailed. 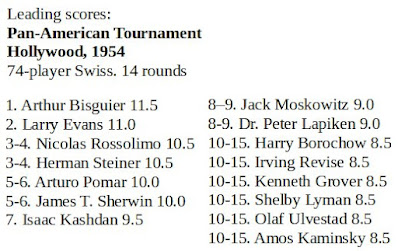 There was also a Rapid Transit event that was won by Larry Evans, with a 19-2 score. He lost one game to second place finisher Louis Spinner who scored 18.5. Sherwin was third with 18.0.
On the June 1954 USCF rating list Henry Gross was a Master with a 2314 rating. In those days the classifications were Grandmaster (rated over 2700) of which there was only one: Samuel Reshevsky. Senior Master (2500-2699). They were: Donald Byrne, Robert Byrne, Arnold Denker, George Kramer and Nicolas Rossolimo.
There were 36 Masters (2300-2499) on the list. Experts (2200-2199) were also rated separately form the Class players. In
the following game Gross defeated Saul Yarmak (born Dec 18, 1933) who won the US Junior Championship in 1953. The following year, 1954, Yarmak, by then a US Army Private, tied for 3rd-4th in the US Junior Championship.
Arthur Bisguier didn't like Yarmak. In The Art of Bisguier, Vol. 1, he wrote that when they met in the 1954 Pan-Am, Yarmak showed neither Bisguier, who was the reigning US Champion, nor the other strong masters any respect. Bisguier called him an “egomaniac" and a "braggart who liked to criticize other players.” As a result, Bisguier offered Yarmak a side bet at 20 to 1 with draw odds that he (Bisguier) would win. Bisguier, playing Black, made good on his bet and won in 27 moves. Yarmak was rated an Expert at 2176 at the time. 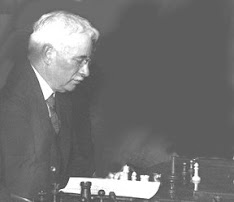 Dr. Walter R. Lovegrove, was a Master Emeritus when he died at the age of 86 in San Francisco on July 18, 1956. For over 60 years he was one of San Francisco's leading players.
In Dr. Lovegrove's heyday, California, while it had an active chess community, was not exactly a hotbed of chess activity. In December of 1854 the first meeting of the famous Mechanics' Institute Chess Club was held. In 1857, Selim Franklin of San Francisco was on the planning and rules committee for the first American Congress in New York that won by Paul Morphy. In 1858, a California Chess Congress was held in San Francisco. The winner was Franklin, who won a gold watch.
In the mid to late 1800s several prominent players did visit the state. In July 1884, Johann Zukertort spent a month in San Francisco playing chess. That year Joseph Redding won three games from Zukertort at the Mechanics' Institute and proclaimed himself champion of the Pacific Coast. In 1885, the Golden Gate Chess Club was formed in San Francisco.
Walter R. Lovegrove (1869-1956) was born on October 24, 1869. He learned the game at the age of 16 by studying the article on chess in the Encyclopedia Britannica. During the period 1886-1890 he strengthened his game by playing at the Mechanics' Institute Chess Club in San Francisco, finally becoming so strong that, in one tournament he gave odds to all the other contestants, yet still won the tournament.
After Pillsbury's success at Hastings in 1895 a meeting was held in January, 1896 in Chicago and the Pillsbury National Correspondence Chess Association (PCAA) was organized.
The PCCA only had 50 members and in 1897 they began their first correspondence tournament, the Grand National. Dr. Otto Meyer of Richmond, Virginia was the winner. The club struggled until late 1905 or early 1906 when all of a sudden the tournaments stopped for unknown reasons. Dr. Lovegrove was the winner of the final Pillsbury National Correspondence Tournament.
When Max Judd visited San Francisco, Lovegrove won six games out of seven from him in casual play. Jackson W. Showalter also visited San Francisco and they played about 30 casual games of which Lovegrove won about a dozen.
In 1893 Lovegrove visited Los Angeles, where he met and pummeled Samuel Lipschutz (1863-1905) by a score of 32-2. It should be mentioned that by that time Lipschutz was in very frail health and afflicted by tuberculosis. He had left New York several times for health reasons, principally staying briefly in Santa Fe, New Mexico in 1893 before relocating to Los Angeles where he lived from 1893 to 1995. In 1904 he relocated again, this time to Florida and the same year he traveled to Hamburg, Germany for treatment, where he had a series of operations but did not survive the treatment.
It's interesting that in the 1940’s one of Isaac Kashdan's children had serious health problems which resulted in a move to California because of its better climate. The move put Kashdan far away from the center of chess activity which was mostly in New York City.
During the early 1900s local players at the Mechanics' Institute used to raise money for exhibition games for stakes between visiting masters and Lovegrove. In December of 1902, the world champion, Emanuel Lasker, visited San Francisco, and played an exhibition game against Lovegrove. Lasker tried to win a drawn game and lost in a problem-like ending.
In April, 1904, Lovegrove won an exhibition game from Pillsbury. It was a wild game in which Pillsbury started a fatal Pawn-grabbing spree that allowed Lovegrove to obtain a crushing K-side attack.. Pillsbury was very upset over losing, especially after the game was published.
In 1912, Dr. Lovegrove played the Dutch Master Louis Van Vliet in London for allegedly for a shilling a game. Lovegrove won the only game they played and so was richer by a shilling (about $7-8, almost $200 today!). Also, in Paris in 1912, Lovegrove beat the Parisian Master Jean Taubenhaus, 10-1.
Then one day in San Francisco in 1913, Lovegrove held his own against the touring Boris Kostic. Vienna, 1922, was the site of two games between Lovegrove and Tartakower and they each won a game. 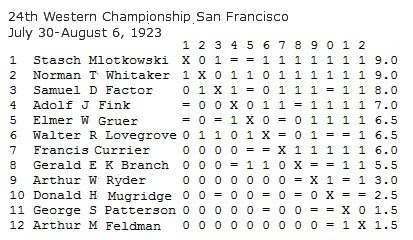 In the following game, after a slow beginning, Lovegrove takes out the nefarious Norman T. Whitaker in the 24th Western Championship held at the Mechanics' Institute in San Francisco in 1923 in grand style.

Here is some more on the sacrifice of the exchange based on instructions from that master of attack, Rudolf Spielmann.
Spielmann observed that the absolute values are what form the basis on which most exchanges are made, i.e. Q= 9, R=5, B and N = 3 and P=1. However, it is the relative value that is the decisive factor for positional play and especially for sacrifices. To wit:
1) The simpler the position, the more the absolute value carries weight.
2) The more complicated the position, the more the relative value of the pieces gain in importance.
When it comes to the sacrifice of the exchange it is never an exactly even transaction so you either win the exchange or you lose it. Exchange sacrifices are dependent on specific positional and tactical factors.
Spielmann offers the following helpful definitions:
1) Any voluntary loss in material counts as a sacrifice.
2) The sacrifice of the exchange is when a Rook is given up for a minor piece and a Pawn.
3) The term sacrificing the exchange when applied to situations where a Rook is given up for a minor piece and two Pawns is incorrect; it should be wins two Pawns for the exchange.
4) The sacrifice of the exchange can serve any purpose. It can be a sacrifice for:
a) Development
b) An obstructive sacrifice, a sacrifice intended to blockade a square, file, rank or diagonal.
c) A sacrifice designed to expose the opponent's King.
In all cases, the sacrifice of the exchange is designed to improve the position of the minor pieces.
Here is a case in point taken from the game Spielmann vs. Tarrasch that was played in Carlsbad 1923. Spielmann gave this game in his classic The Art of Sacrifice in Chess. A great attacker and sacrificial player, in this book he classified various tactical motifs, but as with almost all of those old books from pre-engine days, analytical errors abound in the examples. Still, there is a lot to be learned from the book and even if his evaluations and play in the following game were not always correct, they worked against the great Tarrasch which says something...we can learn ideas from them and maybe use theme in our own games.