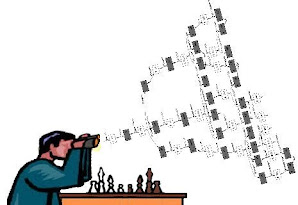 In 1938 Dutch psychologist and master Adriaan de Groot questioned several players including Alekhine, Euwe, Fine, Flohr, Keres and Tartakower about their thinking process and compared the results to those of weaker players. What de Groot found was that when deciding on a move the GMs did not calculate any deeper than the weaker players.
De Groot also discovered that unlike Kotov, who recommended a systematic evaluation thinking process and said you should examine each variation only once, players of all strengths just don’t think like that. They do not make a short, neat mental list of candidate moves then consider them one at a time; their thinking was as haphazard as anybody else's.
Most of the time all that is necessary is to see tactics only two or three moves deep. After Botvinnik was defeated by Reshevsky in the 1954 USSR vs. USA match, Botvinnik wrote that his loss showed that he needed to perfect his play in two move variations. If visualization isn’t the answer, what is?
Studies have shown masters use different parts of their brains than amateurs, maximizing intuition, goal-seeking and pattern-recognition. Researchers used magnetic resonance imaging scans to compare the brain activity of amateurs and professionals Shogi players and they found that certain regions of the expert’s brains lit up while the amateurs' did not. Experts' brains showed more activity in the area associated with visualizing images and episodic memory (i.e. memory consisting of a series of loosely connected parts or events) what is known as the precuneus area of the parietal lobe.
When pressed to come up with a move quickly, activity surged in a region of the brain where goal-directed behavior is rooted. This did not occur in the amateurs or when either group took their time in planning their next move. Researchers believe that Shogi experts have, or are, perfecting a circuit between the two regions that helps them quickly recognize the state of the game and choose the next move. This results in their being intuitive with the result that the candidate moves are generated quickly and automatically without conscious search. Like pattern recognition in chess masters.
Of his game against Pilz at Warsaw in 1934, Najdorf wrote, "This game was awarded the first brilliancy prize and nobody was more surprised than me since I can remember at no time seeing more than two moves ahead."
Nunn wrote of his game against Tal at Wijk aan Zee, 1982, "So far as I can remember, I hardly calculated a single variation more than a couple of moves deep during the entire course of the game." That game is pretty well known...you can view it HERE.
Let’s take a look at Najdorf’s game against the mysterious Pilz. I was unable to identify who Pilz was and what the event was. My first thought was that it was played in the Olympiad that was held in Warsaw that year, but Pilz’ name doesn’t appear on any of the twenty teams. Perhaps it was the 3rd Championship of Poland at Warsaw in 1935. If that was the tournament, it was won by Tartakower.
Concerning this game Najdorf wrote, “At that time I was barely 24 years old; I was a chess lover who played without knowing theory. But, I had a great teacher, known to all of you: Master Tartakover, Lord of the Board, who always said to me, “Learn to reason...the first thing is to reason.”
Of his fourth move he wrote, “And so without delving into what the correct move was, I tried to prevent Black from doubling the Pawns and that's why I played: 4.Qc2."
If you know Spanish you can read Najdorf’s own comments to this game HERE. The pdf scan, a selection of games with his comments, is a gold mine; the Pilz game is on page 4. 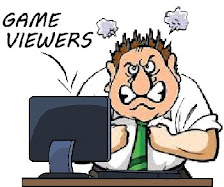 As you may know, as of December, 2020, Flash Player will no longer work. For years I was posting games using Glen Wilson’s excellent KnightVision program, but a while back ran into some problems with it because it uses Adobe Flash and will stop working when Flash stops working. Also, there were some other problems with KnightVision that cropped up so I switched to the very nice Caissa’s Web viewer, but disliked the fact that variations can only appear in the notes, so you can’t play through them in the viewer.
Chessbase also has a really nice game viewer, but it, too, had issues, the worst being that sometimes the text “bled” into the posts below the one in which the game appeared.
Eventually, I switched to ChessOK Aquarium 2014 for publishing. I really like the layout and appearance of the “Web Export for Blog” option, but ran into two huge problems. First, the code is 85 pages long in my Word document which is about 3,000 lines of code on Blogger! Second, all the squares with pieces on them show up as white. However, Aquarium’s publish “iBookHTML for Blog” option uses 16-18 Word pages and translates to 50-60 lines of code.
I really liked the layout of pgn4web and downloaded the program from SourceForge, but for some reason it would not work on my laptop. That was only a minor problem because for the last two posts I simply embedded the games directly off their website and everything seemed fine. Then, while checking my e-mail Sunday I had a message that the games didn’t show up...something about a DNS server couldn’t be found. Fortunately I had not deleted the annotated games from my “Junk Games” folder as I call it and was able to re-post them using Aquarium.
My workhorse remains the old Fritz 12 which I purchased years ago at Office Max for $20. However, using Aquarium to embed games in Blogger isn’t all bad because for the first time since purchasing it, I have found a use for it. Now if I could only find a use for Chess Assistant 18 that sits unused on both of my laptops. Any suggestions?!
Posted by Tartajubow at 9:02 AM No comments: 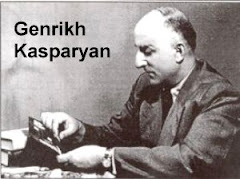 When one thinks of Genrikh Kasparyan (February 27, 1910 - December 27, 1995) they probably think of the man who is considered to have been one of the greatest composers of endgame studies of all time. He was awarded the title of International Judge of Chess Compositions in 1956 and International Grandmaster of Chess Composition in 1972, the first composer to receive this title from FIDE.
Kasparyan started with chess problems, mainly three-movers, but soon discovered that his best field was endgame studies. He wrote several books and collections and composed about 600 studies, many on the theme of domination, winning 57 first prizes. He won the USSR Composing Championship several times.
He was more than a composer, he was also a Soviet master and he became an IM in 1950. A civil engineer by profession, Kasparyan won the 1931 championship of Tibilisi which qualified him for the 1931 USSR Championship. He finished first in the semi-final, but failed to score enough points to get promoted to Master. Back in the days when there wasn’t any Elo system the only way you could achieve the title in the Soviet Union was to defeat an established master in a match or score enough points in tournament play.
Kasparyan was awarded the Soviet master title in 1936 when he defeated the redoubtable Vitaly Chekhover who was no garden variety master. Chessmetrics assigns Chekhover a rating at that time in the mid-2500s placing him in in the top 60 or 70 players in the world.
It would be difficult to name another Soviet master whose playing style was as original...he was able to combine great attacking ability with, as might be expected, a deep positional understanding of endings. As for openings, he paid little attention to them, often selecting little studied openings.
Kasparyan worked very hard to sharpen his tactical abilities which according to Botvinnik marked him as a player of high caliber. His weakness was in positions where he had to defend himself or faced positional pressure. It was suggested that this lack of balance prevented him from obtaining steady tournament results.
In the following years he excelled in tournament play winning the Armenian championship ten times from 1934 to 1956 and the Tiflis championship three times (1931, 1937, 1945). He reached the USSR Championship finals four times (1931, 1937, 1947, 1952), but never finished higher than tenth place. By the late 1940s, Chessmetrics assigns Kasparyan a rating of 2600+ placing him in the world’s top 30, so he could clearly do more than compose endings!
The following win over Chekhover in their 1936 match gives an example of Kasparyan’s play.

...enjoy some Tuba Skinny
Posted by Tartajubow at 10:10 AM No comments: 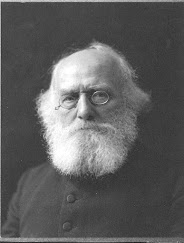 However, I did locate a game of his that was annotated by Lowenthal that appeared in The Chess Player's Magazine in 1865. Calthrop’s opponent in this game was Hugh Alexander Kennedy (August 22, 1809 - October 22, 1878), an English master and writer. He was born in Madras, British India in 1809 and was a British army captain and leading London player. He established the first chess club in Brighton in 1842 and in1844, he lost a match to Howard Staunton (3–8). He also lost a match to Elijah Williams (+2 –4 =0) in 1846 and lost a match to Edward Lowe (+6 –7 =1) in 1849. Kennedy played in the great international London 1851 tournament where he finished in sixth place (out of 16). He knocked out Carl Mayet in round 1 and then lost to Marmaduke Wyvill in round 2.