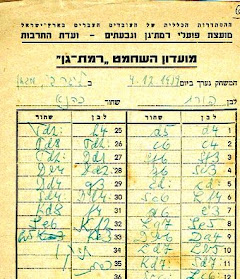 In Israel in early January of 1959, four Egyptian MiG-17 jets penetrated Israeli airspace near Beersheba before being driven off by Israeli fighters. On April 1st, the Night of the Ducks fiasco took place. It was a surprise Israeli military exercise to test the mobilization of the Israeli Defense Force's reserves that caused panic throughout Israel and put the armies of the neighboring Arab states on high alert.
In July David Ben-Gurion resigned as Prime Minister and new elections were called for the Knesset. Also in July the Wadi Salib riots took place. They were a series of street demonstrations that resulted in vandalism in the Wadi Salib neighborhood of Haifa that were sparked by the police shooting of a Moroccan Jewish immigrant. Rioters accused the police of ethnic discrimination against Mizrahi Jews.
On November 4th, six Israeli jets and four Egyptian MiG-17s snarled in a dogfight near the border between the two nations. All planes reportedly returned safely and the battle did not lead to further action.
In other Israeli news, in 1959 the Israel Chess Federation organized the first international chess tournament in Israel. Top players from Russia, Yugoslavia and other countries were invited, but for various reasons most of them were unable to participate and that left Samuel Reshevsky and Hungary's Laszlo Szabo as the only leading GMs and it was obvious from the beginning that first place was going to be won by one of them.
By coincidence the deciding game between Szabo and Reshevsky was scheduled for the last round. It was a hard fought game in which Reshevsky (black) played the K-Indian, a defense that was a new experiment for him. Szabo established a considerable advantage in the middlegame, but with grim determination Reshevsky fought back. In the ensuing R and P ending Szabo again had gained the advantage, but let it slip away and after 69 moves they agreed to a draw.

In the meantime, the two GMs had to continue to chalk up points in order to keep up with each other. This was a considerable strain on the nerves because most of the other participants were not easy to beat. Reshevsky's game against England's Robert Wade was case in point. He held his own until after adjournment. Upon resumption he got into terrific time trouble and made a slip in the ending. A tough loss for Wade.

The 1957-58 US Championship, the tenth, was played in New York City and was on the anniversary of the First American Congress, the event that had heralded the arrival of Paul Morphy a century before. The 1957-58 Championship also heralded the arrival of a new player who was soon to establish himself as one of the world's best, Bobby Fischer.
For several years there had always been doubts that the championship could be played at all due to the USCF's perpetual financial crises that dated back to 1948.
In the case of the 1957-58 event a small group of men, mostly wealthy members of the Manhattan Chess Club, banded together and formed the American Chess Foundation which declared that they would choose the best players for small, topflight events and finance them. The result to date had been three strong Rosenwald invitational tournaments and three matches. Reshevsky won two of the tournaments and Evans and Bisguier tied in one. Reshevsky also defeated William Lombardy, Arthur Bisguier and Donald Byrne in matches.
For the 1957-58 event, the fourth Rosenwald, the USCF agreed to let it be designated as the 10th US championship and as the FIDE zonal tournament. A most magnanimous gesture considering the USCF didn't have any money. The first two finishers qualified for further tournaments to select a challenger to Mikhail Botvinnik for the World Championship.
Fischer had been quite active in 1956 and 1957, was attracting a lot of attention, and had been featured in several issues of Chess Review and newspaper articles. Even so, most players considered Reshevsky to be the favorite. Others considered as challengers to Reshevsky were Larry Evans and Robert Byrne, who declined his invitation at the last minute. William Lombardy was considered a dark horse.
Arthur Bisguier reckoned that Fischer might score a little over 50 percent. Bisguier was wrong. Fischer started with a win and two draws, including his draw with Reshevsky in round three. After 5 rounds he was a half point behind Reshevsky with 4-1 score, but then came five straight wins. Reshevsky lost a whopping (for him) two games (to Sherwin and Lombardy). In the end, Fischer finished a whole point ahead of Reshevsky.
The May 5th issue of Chess Life had the 11th national rating list with the ratings of 3,350 players. In addition to the below list of top players there were 60 rated Masters which included 2231 rated Robt. J. Fischer of Brooklyn, NY. 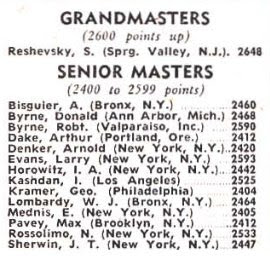 The above mentioned paucity of funds on the part of the USCF had a good explanation. In those days it was not always a requirement to belong to the USCF to play in tournaments. Chess Life noted that of the rated players only 1,022 were actually members of the USCF. Worse yet, only only 61 percent were class players (i.e. rated below 2000). Organizers were required to pay a fee of 10 cents per game (about $0.94 in today's dollars) to get their tournament rated.
USCF membership was $5.00 which was actually pretty hefty because it figures to be almost $47.00 today. That five dollars would buy you almost 21 gallons of gas, or over 16 pounds of hamburger, or 9 dozen eggs or 25 loaves of bread.
Although Fischer would soon make everyone forget about Reshevsky, the old man (age 46) could still play. In the following game Reshevsky emerged from the opening with an inferior game when he resorted to a variation of the Sicilian that the Russians had recently been experimenting with. The belief that Reshevsky never studied openings is simply not true. However, Pal Benko once observed that, surprisingly, Reshevsky had a poor memory for them!
Bisguier played accurately and by move 12 Reshevsky had an unpleasantly camped position, but he remained calm and relying on fortitude and confidence, he waited for Bisguier to err which he did when he chose risky continuation as was typical for him. 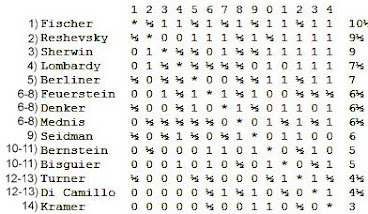