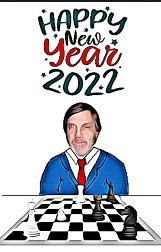 I wish all readers a safe and prosperous 2022. May you all gain 400 rating points. Since starting this blog it has had over 1.75 million visits...thanks!
Posted by Tartajubow at 9:39 AM No comments: 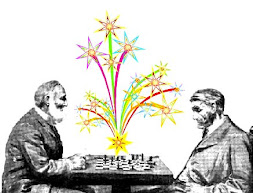 For today's game we are going to step way back in time to the year 1834. In the U.S. the Senate censured President Andrew Jackson for refusing to turn over documents to Congress regarding his dismantling the Bank of the United States. Sound familiar?
In other news Stephen F. Austin, the Father of Texas, was imprisoned in Mexico City for insurrection. He was not tried and finally returned to Texas in August 1835. John Jacob Astor, a German immigrant, was the richest man in the United States. He was the organizer of the American Fur Company, which he sold in 1834. And, Henry Blair received the second patent awarded to an African American when he patented a corn planter.
In June 1834, the first La Bourdonnais-McDonnell match was played. It consisted of 25 games and La Bourdonnais won with a +16 -5 =4 score.
There was a series of La Bourdonnais-McDonnell matches that year between Louis-Charles Mahe de La Bourdonnais of France and Alexander McDonnell of Ireland. The matches confirmed that La Bourdonnais was the leading player in the world. The overall result was La Bourdonnais scored +45 -27 =13.
Their match was the first of importance in the history of chess and the games were published widely and were annotated and discussed by enthusiasts all over Europe. In the matches both players introduced several new opening innovations. There was no time limit, no seconds and very little stakes. McDonnell sometimes took over an hour and a half to make a move. One game a day was played every day except Sunday. A game began at noon at the Westminster Chess Club and if the game was still in progress by 6 pm, they adjourned and finished it the next day. The matches ended in October, 1834.
Alexander McDonnell was born in Belfast on May 22, 1798. He held the post of Secretary of the West India Committee of Merchants. In the 1830s he was the best player in England. He developed a kidney ailment and died September 14, 1835 of Bright's disease in London at the age of 37.
Bright's disease is a kidney diseases that today is known as acute or chronic nephritis. It was characterized by swelling and and was frequently accompanied by high blood pressure and heart disease. Treatment in those days consisted of warm baths, blood-letting, a plant called squill, digitalis, mercuric compounds, opium, diuretics, laxatives and dietary therapy, including abstinence from alcoholic drinks, cheese and red meat.
La Bourdonnais was born on the French Island La Reunion in 1797. He learned chess in 1814 and took lessons from Deschapelles. He later became the best chess player in France. He came from a noble family and heir to an old estate, but lost his fortune in a building speculation and turned to chess to earn his living. In November, 1840 he was diagnosed with dropsy, an old term for the swelling of soft tissues due to the accumulation of excess water.
Today one would be more descriptive and specify the cause and so, for example, the person might have edema due to congestive heart failure. He also had a scrotal, or inguinal as it is called, hernia. It is the most common type of hernia and can appear as a swelling or lump in your groin, or as an enlarged scrotum. The swelling may be painful and the lump often appears when you're lifting something and disappears when you lie down.
La Bourdonnais died at the age of 43 and was buried at Kensal Green All Souls' cemetery, next to McDonnell.
In the following game McDonnell played an uninspired opening and allowed La Bourdonnais to set up a strong mobile Pawn center of the type that had been recommended bu Philidor.
When McDonnell threatened an attack, La Bourdonnais sacrificed the exchange resulting in a tactical fireworks. In the end, his three passed Pawns on the second rank were more than McDonnell's Queen and Rook could handle.
This amazing game was the first game in the excellent book The World's Greatest Chess Games. As to be expected, the book, which was published in 1998, has annotations that a sub-par based on today's standards. The authors were assisted in their task using ChessBase which used (I think) Fritz 5.32, an engine that has been far surpassed by today's engines. As a result, the notes and some of the conclusions are not quite correct, but it's still a fantastic game.
A word about the opening. The move 4...e5 dates back to this match when La Bourdonnais used it and it was also popular for a short time in the 1940s. In these earlier games the Lowenthal Variation (4...e5 5.Nb5 a6 6.Nd6+ Bxd6 7.Qxd6 Qf6) was played. In those games black gave up the two Bishops to achieve a lead in development. However, the line fell out of use once it was determined that white has the advantage.
The Sveshnikov Variation was pioneered by Evgeny Sveshnikov and Gennadi Timoshchenko in the 1970s. Before their efforts, the variation was called the Lasker–Pelikan Variation. 4...Nf6 5.Nc3 e5
In the late 1980s players revived 4...e5 with the intention of meeting 5.Nb5 with 5...d6 (the Kalashnikov Variation). The Kalashnikov Variation are close relatives, the difference between the two being that in the Kalashnikov black does not develop the Knight to f6. 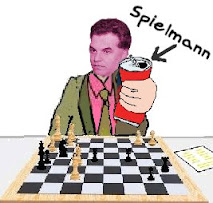 Tartakover described Richard Reti (his name rhymes with eighty) as follows: "Reti studies mathematics although he is not a dry mathematician; represents Vienna without being Viennese; was born in old Hungary yet he does not know Hungarian; speaks uncommonly rapidly only in order to act all the more mature and deliberate; and will yet become the best chess player without, however, becoming world champion."
Personally, I never cottoned to Reti's games, but that's just me. He was among the best players in the world during his prime as he demonstrated at the great New York tournament in 1924 even though he finished fifth (out of 11) wth a +9 -8 =3, but defeated Alekhine, Bogoljubow and ended Capablanca's eight-year winning streak.
Chessmetrics assigns him a high rating of 2710 on the December 1920 rating list, placing him at number 6 in world behind Capablanca (2830), Lasker (2748), Bogoljubow (2724), Rubinstein (2723) and Tartakower (2716).
Early in his career, Reti favored aggressive openings and tactical positions, but later became a chief proponent of the Hypermodernism School which he wrote about in his classic 1921 Modem Ideas in Chess. He also composed some of the finest endgame studies in history.
Chess was Reti's life and livelihood and over the course of his 20 year career, he played in 51 tournaments, 8 matches and gave numerous blindfold and simultaneous exhibitions. He also wrote many chess columns for European newspapers. In 1925 Reti set a world blindfold record by playing 29 games simultaneously and scoring +21 -2 =6.
Richard Selig Reti (May 28, 1889 -June 6, 1929) was an Austro-Hungarian and later Czech player. With the exception of Nimzovich he is considered to be the Hypermodern movement's foremost contributor.
Reti was born to a Jewish family in Bazin, Austria-Hungary (now Pezinok, Slovakia), where his father worked as a physician in the Austrian military. His older brother, Rudolph, was a noted pianist, musical theorist.
One of the top players in the world during the 1910s and 1920s, Reti started out as a classical, but tactical player, who favored openings like the King's Gambit. However, after the First World War his style changed and he became a proponent of Hypermodernism.
It is not clear when Reti learned to play chess, but his brother thought he was about five and that he picked up the game from his parents. Because his parents were both poor players they did little to foster their son's enthusiasm for the game. Reti had few opportunities to improve his play, but studied what books were available, played his brother and occasionally made trips to the local club.
Reti died on June 6, 1929 in Prague of scarlet fever, a bacterial illness that develops in some people who have strep throat. It features a bright red rash that covers most of the body and is almost always accompanied by a sore throat and a high fever. Today scarlet fever is most common in children 5 to 15 years of age.
Although it was once considered a serious childhood illness, antibiotic treatments have made it less threatening. Still, if left untreated, it can result in serious conditions that affect the heart, kidneys and other parts of the body.
His ashes are buried in the grave of his father, Dr. Samuel Reti, in the Jewish section of Zentralfriedhof cemetery in Vienna.
In the following game against Rudolph Spielmann at Bad Trentschin-Teplitz, 1928, Reti relied on tactics to crush his opponent.
According to Reinfeld and Chernev in Chess Strategy and Tactics, this game converted Spielmann from playing K-side openings to playing 1.d4. They wrote that the suddenness of the change "was no less astonishing than the stubbornness with which Spielmann had previously clung to the King’s Gambit and similar openings. Perhaps the clue to this surprising change will be found in the overwhelming drubbing administered by Reti" in their encounter in that event.
How, exactly, they reached that conclusion is not known. About the closest thing was in the annotations by Spielmann in the May 1928 edition of Wiener Schachzeitung when he wrote: Reti always plays the best chess against me. In what contrast is his remarkably weak play in several other games in the same tournament.