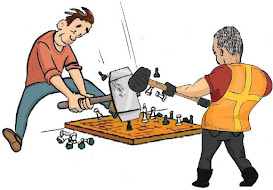 You have probably never heard of Derek G. Horseman who passed away at the age of 78 on March 18, 2010. Virtually unknown outside a few old-time English players, he was a strong player while at Oxford University. Chessmetrics estimates his high rating to have been 2494 in October of 1958, placing him at number 223 in the world.
He won the Hastings Challengers tournament in 1955/56 thereby qualifying for the prestigious Hastings Premier of 1956/57.
The story goes that is was Horseman who prevented Bobby Fischer from playing in the Premier that year. Frank Rhoden, the Hastings organizer, managed to get the 13-year old Fischer invited to the Premier at the last minute. Rhoden claimed Fischer was waiting at the airport, but there was a slight problem; one of the English players in the Premier (Peter Clarke, Horseman Jonathan Penrose and C.H.O'D. Alexander) had to yield their spot, so Rhoden requested Horseman do so and he refused. His refusal left Rhoden unhappy because the Fischer publicity value was lost.
It's hard to criticize Horseman because he had earned his spot. Besides that, Horseman did the best of the British players except for Clarke (+1 -1 =7) who tied for 5th with Laszlo Szabo. Horseman finished 8th with +2 -5 =2. Penrose (2.5 points) and Alexander (2 points) brought up the rear and neither of them won a single game.
In the process, Horseman drew with Szabo in a game featuring clever tactical blows by both players in a see-saw battle. In the end, Szabo had r a remarkable saving resource. Horseman defeated Penrose and Alexander. The Premier was won by Gligoric and Larsen (tied). His performance rating for the tournament is estimated to have been 2526.
Horseman competed in four British Championships 1954, 1956, 1957 and 1958 making a plus score in each of them.
Leonard Barden described Horseman as gentle, friendly and good humored. He was a sharp and inventive player with creative ideas and while at Oxford improved his game to around IM level.
Although he continued to play chess, Horseman pursued a career in education as a math lecturer, then an Education Adviser until he retired. Until shortly before his death he coached juniors at the local chess club and a primary school.
Horseman's son wrote that his father, a deeply devout man, had taught his four grandchildren to play chess. His son added that his father had played in Liverpool at the British championships in 2008 where he was the joint winner of the Under 175 (2000 Elo) section.
Horseman and his wife went on vacation in Spain in January, 2010, to escape the cold weather. While there he was suddenly taken ill with septicemia and was in hospital in the Costa del Sol until he was transferred by air ambulance to Southport where he died.
In the following game Horseman swings a mighty tactical hammer against a player who at the time was a world championship contender. Unfortunately for Horseman, his opponent found a lucky escape. 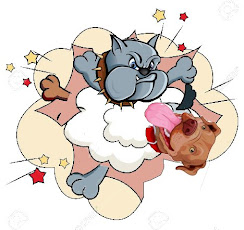 The was a lot going on in 1943, but one of the best news stories had to be that the great snack food nachos were invented by Ignacio Anaya in Piedras Negras, Coahuila, Mexico. Also in Mexico, a farmer named Dionisio Pulido had a volcano start to form in his corn field. By the early 50s it was over 1,200 feet tall. It was the first volcano birth ever seen by man.
Out in the South Atlantic there was an island named Thompson Island. The island was first reported and named by whaling ship captain George Norris in 1825. The last reported sighting of the island was in 1893. The German survey ship Valdivia fixed the position of nearby Bouvet Island in 1898, it when it looked for Thompson, it couldn't be found!
If Thompson ever existed, it is probable that it disappeared in a volcanic eruption sometime in the 1890s, but in 1997 it was reported that the sea depth at the supposed location is greater than 7,900 feet, or about a mile and a half which made the existence of a submarine volcano all but impossible. Nevertheless, the island continued to appear on maps published as late as 1943.
In US chess, at the Hotel Syracuse in Syracuse, New York the US Open Championship and the NY State Championship were held in mid-August. As can be seen from the scores, the tournament was a battle between Horowitz and Santasiere. 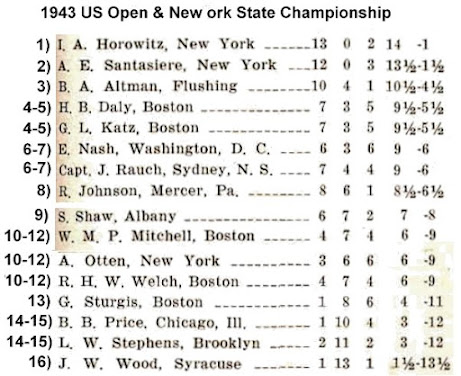 Both of them jumped off to an early lead and both were undefeated. Santasiere had two early draws (with Katz and Otten) which left him trailing Horowitz by a full point until Horowitz was held to a draw by Katz. Horowitz and Santasiere met in the final round separated by half a point. Horowitz needed only a draw to finish first, but Santasiere could tie for first if he won. Strange as it may seem Santasiere, who was the reigning Marshall Club champion, took no chances, made no attempt to fight for a win and was content to draw by repetition.
A special guest at the event was 73 year old Herman Helms who was honored for his 50 years of publishing a chess column in the Brooklyn Daily Eagle and 40 years of publishing the American Chess Bulletin. USCF president George Sturgis conferred upon him the title of Dean of American Chess.
In the Experts section G.O, Christensen of Brooklyn finished first with a +7 -0 =4 score and Louis Persinger, violinist, pianist and professor of violin, won the Class A tournament with a +9 -0 =2 score.
In the following game Horowitz defeats Arthur W. Wood, a local player from Syracuse, who also served as an officer in the state chess organization. The game features Boden's Mate which is a pattern in which two Bs on criss-crossing diagonals deliver mate.
The mate gets its name from Samuel Boden, who played it in Schulder–Boden, London 1853. However, it had been known previously from the game Horwitz–Popert, Hamburg 1844. It's a handy pattern to know (I have pulled it off once) and you can play through a collection of games featuring the pattern at chessgames.com HERE.