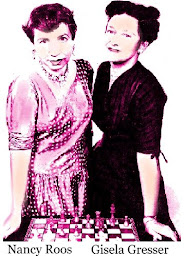 Roos' play seems not to have been affected by the fact that she had not fully recovered from an automobile accident in July and was frequently in pain. The two games which clinched Roos' share or the title, were her wins against the two U. S. Women's Champions, Mae Karff and Gisela Gresser.
The game against Karff was decided in dramatic fashion when Karff made an unprecedented oversight on move 31 that left spectators stunned. Karff suffered her loss gracefully and Roos begged Chess Life columnist Willa Owens not to publish the game. Here is the position after 31.Qc7. 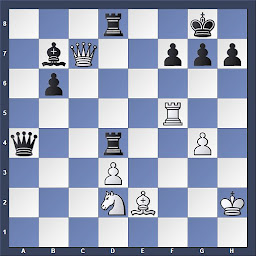 Black is winning easily and all she has to do is play 31...R4d7 or 31...Qd7 which would have left her with a routine win. Instead, Karff decided to threaten mate on g2 or force the exchange of Qs with 31...Qc6?? and mate in two was unavoidable after 32.Qxf7+ 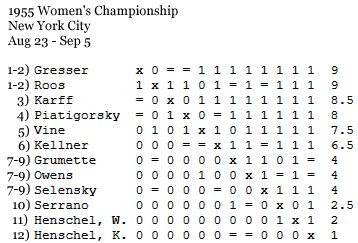 In the following game both players indulge in boring maneuvering until Gresser errs with 26...h6 and from then on is subjected to a relentless attack by Roos.

...that’s what Anatoly Karpov called him.
Wolfgang Unzicker (June 26, 1925 - April 20, 2006) was one of the strongest West German GMs from 1945 to about 1970. He decided against making chess his profession, choosing law instead. He was rated in the mid-2500s.
Unzicker was born in Pirmasens, a small town near Kaiserslautern in the province of Rhineland-Palatinate noted for shoe making. His father taught him how to play chess at age 10. His brother, four years older, was also a chess player but was killed in World War II.
Unzicker began to play tournaments abroad in 1948 and was awarded the GM title in 1954. He won the German Championship six times from 1948 to 1963 and tied for first in 1965. In 1956 he lost a match to Paul Keres in which the Ruy Lopez was played in all eight games. From 1950 to 1978 Unzicker played in twelve Chess Olympiads, and was first board on ten of them. For many years he was legal advisor for the German Chess Association.
Among his major tournament successes were:
* tie for first with Boris Spassky at Sochi 1965
* first at Maribor 1967 ahead of Samuel Reshevsky
* first at Krems, and Amsterdam 1980 tied with Hans Ree.
* shared the prize for best top-board score with Miguel Najdorf for his performance on first board for the West German team at the 1950 Dubrovnik Chess Olympiad.
* shared fourth place with Lajos Portisch in the 1966 Piatigorsky Cup
* Hastings 1969–70, second behind Lajos Portisch
* second behind Viktor Korchnoi at South Africa 1979
Unzicker had a classical chess style modeled after Siegbert Tarrasch and, like Tarrasch, he shared some of the same dogmatic ideas. When one of his peers advised him that his openings were unambitious, he replied, "I know, but it could be worse." Unzicker died of a heart condition while vacationing in Albufeira, Portugal.
At the Black Sea resort city of Sochi in 1965 he achieved a feat that very few Western players had accomplished when he tied for first place.  There is an interesting tribute to Unzicker on Chessbase HERE. 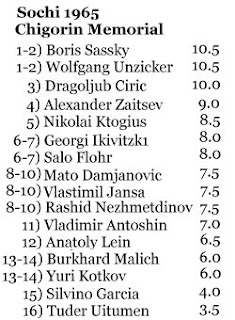 At half time the 8th Avenue Temple basketball team and the Workmen's Circle were deadlocked 8-all, but in the closing seconds Bobby Fischer scored the winning basket. Oops! That was reported in the January 17, 1938 edition of the Brooklyn Daily Eagle, so it was the wrong Bobby Fischer.
In chess news John W. Collins, secretary of the Brooklyn chess league and Louis J. Wolff were the first players in the borough to file their entry for the preliminaries of the US Championship.
The Brooklyn Chess League final standing were Collins’ Hawthorne club which finished ahead of King’s club (headed by Herbert Seidman) followed by the Gambit club (headed by Harry Baker).
Over in England, Reshevsky finished first ahead of Paul Keres and C.H.O’D. Alexander who tied for second at Hastings. In a small announcement in the Daily Eagle it was reported that “J.R. Capablanea of Havana, former world champion...won first prize in a European tournament at the Salons Caissa with a score of 8-2. N. Rossolimo, an Italian, finished second with 7.5-2.5 and Dr. H. Cuikerman of Austria was third with 6-4.”
There were a number of interesting games played in this long-forgotten tournament, but the following game between Capablanca and Rossolimo was instructive. It illustrates the theme of discovered attack. At the critical moment Rossolimo miscalculated and made a tactical mistake. At move 27, instead of capturing the checking N, Capa moved his K to c3 where it attacked two black pieces and the game was essentially over.
A Rossolimo story: Back in the mid-1960s a friend and I were on a 4-day liberty from the Marine Corps Base at Camp Lejeune, North Carolina and slumming around New York City when we ended up at Rossolimo's Chess Studio in New York City. We were the only one’s in there at the time and I asked Rossolimo for a game to which he replied, “I can’t play for nothing.” He wanted $20 which on my Corporal’s pay was a lot...about $163.68 today!
In spite of the steep fee I coughed it up and we began play using a Druke Player’s Choice set at the end of a long table. I had white and remember the opening was the Leningrad Variation of the Nimzo-Indian (4.Bg5).
I got a pretty good game and Rossolimo walked over to a shelf and picked out a board that appeared to be made out of blue butterfly wings under glass and set it down at the other end of the table where the sun was shining on it. He then walked back to our board and began grabbing the pieces and setting them up on the glass board. When I asked what he was doing he said, “I want to play on this board,” I think he set the position up correctly, but the sun glare off the glass board combined with the shiny butterfly wings was too distracting and I soon lost.

Bitten By A Dead Snake 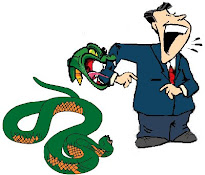 Poisonous snakes are dangerous when they're alive, but they can also be dangerous after they're dead.
There’s a tale of a chef in China who was preparing a delicacy known as cobra soup who was fatally bitten by the decapitated head of one of the snake heads he had chopped off 20 minutes earlier.
In 2007, a man in Washington state chopped the head off a rattlesnake with a shovel and when he bent down to pick it up, the dead snake bit him in the hand; he survived.
In 2014, a man in Australia was bitten by a venomous red-bellied black snake 45 minutes after he had chopped it in half with a shovel. He survived, but reportedly spent two days in intensive care.
Steven Beaupre, a biology professor at the University of Arkansas, explained that snakes are well known for retaining reflexes after death as do many cold-blooded animals. For venomous snakes, such as cobras and rattlesnakes, biting is one of the reflexes that can be activated in the brain even hours after the animal dies.
The bite reflex is stronger in venomous snakes than it is in some other carnivores because these snakes use their bite differently...unlike other biters which kill prey by sinking their teeth into the flesh and holding on, snakes deliver just one extremely quick bite and then move away before getting stepped on. The attacks are lightening fast..rattlesnakes have been known to inject venom into prey in less than two-tenths of a second.
Even after decapitation the snake’s nerves have not stopped functioning. The bodies of snakes have been known to continue rising off the ground in a menacing pose, and even to strike out against a perceived threat.
How can such a thing happen? This eerie phenomenon is caused by the ions, or electrically charged particles, which remain in the nerve cells of a snake for several house after it dies. When the nerve of a newly dead snake is stimulated, the channels in the nerve will open up, allowing ions to pass through. This creates an electrical impulse that enables the muscle to carry out a reflexive action, like a bite.
The bite and injection of poison reflex is triggered by some kind of information that comes into the mouth cavity so it’s likely the people who were bitten by the dead snakes accidentally put a finger in the snake’s mouth which triggered the bite response.
Chessplayers have been known to get snake bit by dead lost opponents. As C.J.S. Purdy observed, tactics are usually brought off by the player with the superior position, but many tactics arise entirely from a mistake by one side. There is no rule that says the player with the superior position can’t be the on making the mistake!
Purdy was quick to point out that if you don’t bother to check for tactics at EVERY move you’ll be constantly making absurd blunders. In ANY position you should look around for possible tactics. Every part of the board must be examined for some accidental feature that may give rise to a tactic.
Frank Marshall said, “Winning a won game is the hardest thing in chess.” And, there are three main reasons why we don’t win won games. 1) We relax thinking the game is won and our opponent will soon resign. As a consequence, we overlook his resources. When we do realize he has resources there may also be a psychological shock that leads us to making mistakes. 2) Sometimes we may know we have a winning advantage be it positional or material, but we simply lack the technique, or we begin seeing ghosts in the position a begin reacting to perceived threats. 3) If it’s an ending we may simply lack the theoretical knowledge of the winning technique.
The Reggio Emilia tournaments were held annually in Reggio Emilia, Italy and were known as Torneo di Capodanno (New Year's tournament) because thay started just after Christmas and ended on the day of Epiphany (January 6th).
Although there were tournaments held beginning in 1947 and became Italy's oldest and most renowned tournament. The last one was held in 2011/2012 and the next edition had to be canceled due to economic reasons.
The 1987/88 tournament was won by Vladimir Tukmakov, but he should have been tied with Alexander Beliavsky except his opponent, Larry Christiansen, swindled him out of a win when Beliavsky got careless.
Final standings:
1) Vladimir Tukmakov 6.0
2-3) Alexander Beliavsky and Larry Christiansen 5.5
4-6) Viktor Korchnoi, Lajos Portisch and Zoltan Ribli 5.0
7) Predrag Nikolic 4.5
8) Ulf Andersson 3.5
9-10) Rafael Vaganian and Jozsef Pintar 2.5