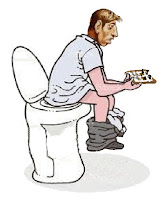 The Original Toiletgate
At the pre-match press conference, when asked if he was worried about the threat of the US government, Fischer pulled out the Treasury letter and spit on it. He then announced that he hadn't paid taxes since 1976, was going to write a book that would prove that Russian players, whom he described as “some of the lowest dogs around,” had destroyed chess through “immoral, unethical, prearranged games.” Fischer added that he wasn't really an anti-Semite, because he was pro-Arab and Arabs are Semites too. He also explained that that Soviet communism was a mask for Bolshevism which was a mask for Judaism.
There was also a Toiletgate of sorts when Fischer informed tournament officials that he wanted the toilet in his bathroom to be elevated. This may seem a weird request, but probably not so much in Fischer's health conscious mind.
Like may people, Fischer probably got some of his best ideas while sitting on the throne. And, getting up from a regular toilet is not much different than getting up from a squat and squats are bad for your knees. Also, being a tall fellow (6 feet, one inch) it makes sense; if he didn't already have knee problems, a taller toilet would help prevent future problems.
Generally referred to as “handicap” toilets, some call them “comfort” toilets. Advocates claim they have a preventive effect on our kneecaps and over a lifetime it might reduce the number of visits people make to orthopedic surgeons.  On the downside, they are uncomfortable to really short people.