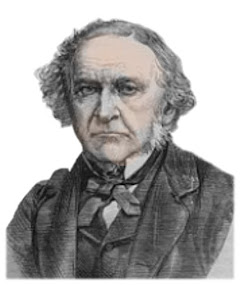 Bell's Life magazine was founded by Robert Bell who sold it to the owner of The Observer in 1824 or 1825. From 1824 to 1852 Bell's Life was Britain's leading sporting newspaper, without which no gentleman's Sunday was quite complete.
From around 1830 it gave increasing coverage to racing and this soon comprised more than a third of the paper, following general news and followed in its turn by other sporting news (notably boxing but all other sports too).
It is believed that the first time the term grandmaster was used was when a correspondent writing to Bell's Life in 1838 called the English player William Lewis (1787–1870) "our past grandmaster."
Born in Birmingham, as a young man Lewis moved to London where he worked for a merchant for a short period. He became a student of Jacob Sarratt, but in later years he showed himself to be rather ungrateful towards his teacher. Although he considered Sarratt's Treatise on the Game of Chess (published in 1808) a poorly written book, in 1822 Lewis published a second edition of it three years after Sarratt's death. This was in direct competition with Sarratt's own superior revision published posthumously in 1821 by Sarratt's poverty-stricken widow. In 1843, many players contributed to a fund to help the old widow, but Lewis was not one of them.
Around 1819 Lewis operated the famous automation, the Turk. He suggested to owner Johann Maelzel that Peter Unger Williams, a fellow ex-student of Sarratt, should be the next person to operate inside the machine which Williams later did.
Lewis visited Paris along with Scottish player John Cochrane in 1821, where they played with Alexandre Deschapelles, receiving the advantage of Pawn and move. Lewis won the short match with a win and two draws. Lewis' career as an author began at this time and included translations of the works of Greco and Carrera.
He was the leading English player in the correspondence match between London and Edinburgh in 1824, won by the Scots (+2 = 2 -1). Later, he published a book on the match with analysis of the games.
During the period of 1834–36 he was also part of the Westminster Chess Club that lost two games in a match against the Paris Chess Club. Starting from 1825 he preserved his reputation by the same means that Deschapelles used in France, by refusing to play anyone on even terms. In 1825 Lewis founded a Chess Club where he gave lessons.
He was declared bankrupt in 1827 due to bad investments on a patent for the construction of pianos and his chess club was forced to close. The next three years were difficult, but in 1830 he got a job that assured him of solid financial security for the rest of his life and it allowed him to focus on writing his two major works: Series of Progressive Lessons (1831) and Second Series of Progressive Lessons (1832). The first lessons were elementary while the second concentrated on openings and for the first time the name Evans Gambit was used.
Eventually Lewis realized that he could no longer give the English players a handicap and so he gradually withdrew from active play. After retirement he wrote other chess books, but the positional ideas of the new generation players was beyond him and so his last book (A Treatise on Chess) that was published in 1844 was already out of date. 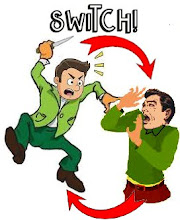 Recently I posted on the Leopold Trebitsch Memorial Tournament of 1914 also known as Vienna 1914. By chance I ran across the game Martinolich vs. Tartakower from the first Trebitsch Memorial.
The first memorial was organized by the Vienna Chess Club in 1907 with funds bequeathed to it by Leopold Trebitsch, a wealthy businessman who had been vice-president of the club until his death on December 12, 1906, a month before the tournament.
The tournament had a strong field and as Dr. Julius Perlis wrote, "The result was a triumph for players who favor brilliancy in preference to ultra-modern tendencies, Mieses and Duras admittedly producing some of the most effective examples of contemporary chess from the spectacular point of view." Mieses' victory was one of the most notable achievements of his career. 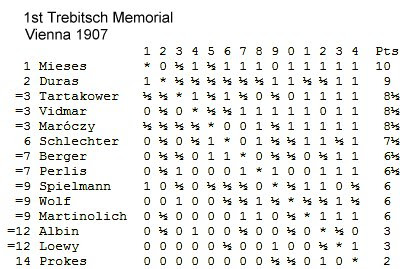 In today's featured game Tartakower defeats the virtually unknown Italian master Giovanni Martinolich (1884-1910, age 26) in a game in which the roles of the attacker and defender are reversed when Martinolich played the dubious Gledhill Attack against Tartakower's French Defense.
Martinolich was born in Trieste and was the unofficial Italian champion in 1906. He learned chess from his father at the age of 16 and after after beginning his studies in Vienna in 1901 he showed rapid improvement. He has several success in tournaments in Austria and Italy. He died suddenly of heart disease at the age of 26. 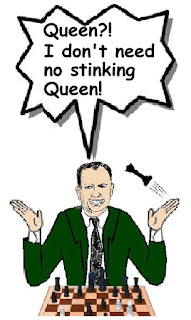 The 18th Soviet Chess Championship took place in Moscow from November 11th to December 11th, 1950.
Mikhail Botvinnik and David Bronstein were preparing for their upcoming world championship match and so they did not participate. In those days the Soviet Championships were stronger that many international tournaments and this one was no exception. Strongmen Smyslov, Boleslavsky and Flohr had mediocre results while Aronin, Lipnitsky and Tolush surprised everyone by keeping pace with the leaders.
When the last round arrived Keres and Tolush were tied and first place depended on their games. Tolush gained the advantage against Boleslavsky, but boogered up the ending after adjournment and had to accept the draw. The Averbakh vs. Keres game (an old fashioned Four Knights Game) was also adjourned and upon resumption Keres managed to squeeze out a draw in an interesting ending. It was the second of what would be three titles for Keres, and a return to form from having finished in the middle of the field in the previous two editions of the Soviet championship. 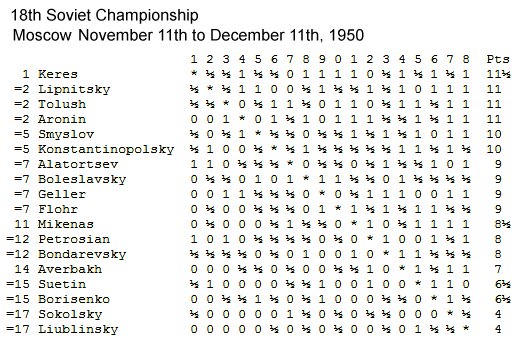 The following game has been praised by Nunn, Emms, Soltis and probably a lot of others. Soltis even listed it in the top 50 of the whole of the 20th Century.
The winner, Isaac Boleslavsky, was a fantastic tactical player and although few realize it, at one time he was world championship material. See my post on him HERE.
His opponent, was a hydraulics engineer named Vladimir Alatortsev (1909-1987) who besides being a very strong player was also a chess author, and administrator. His heyday was in the 1930s. He held the championship of both Leningrad and Moscow and played in the Soviet Championship finals nine times. He semi-retired from tournament play in the early 1950s and concentrated on organizing, teaching and coaching. He never had the opportunity to compete outside the Soviet Union and in 1983 FIDE awarded him the title of Honorary Emeritus Grandmaster.