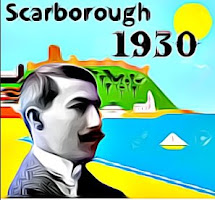 At their 23rd Annual Congress due to be held at Scarborough from June 23 to July 5, 1930 the British Chess Federation decided to substitute for their British Championship event an international tournament containing six foreign masters and six of the leading British players. Dr. Savielly Tartakower of Poland was invited but fell ill and his place was taken by Vera Menchik.
Scarborough is a town on the North Sea coast of eastern England. During the First World War the town was bombarded by German warships in an act which shocked the British. Read more...
Big game tunny (Atlantic blue fin tuna) fishing off Scarborough started in 1930. Tunny fishing was a sport practiced by wealthy aristocrats and military officers mostly in the 1930s. In 1933 a gentlemen’s club, the British Tunny Club, was founded in 1933 and set up its headquarters in the town and Scarborough became a resort for high society.
After a poor season in 1931, in 1932 Harold Hardy battled a tunny about 16 feet long for over seven hours before his line snapped and the fish got away! Four visitors who described the struggle as the greatest fight they had ever seen in their lives. Eventually tuna disappeared and in 2000 a 76-year-old pensioner using a fishing rod landed the largest tuna caught off the British Isles for nearly 50 years.
On June 5, 1993, Scarborough made headlines when a landslide caused part of the Holbeck Hall Hotel, along with its gardens, to fall into the ocean. Read more...
When thinking of Rubinstein, one usually thinks of the claim that he was one of the strongest players never to have won the World Championship, his positional play and endgame expertise, especially in Rook endings. Like all great players though, that was a matter of style because if need be he could also conduct a brilliant attack. Even so, the only person I have ever heard of who held Rubinstein to be his favorite player is GM Boris Gelfand.
In the following game Rubinstein, who played some really good games at Scarborough, defeats Edward G. Sergeant in a game where both sides made some tactical mistakes.. The British Chess News has a nice tribute to Sergeant HERE. 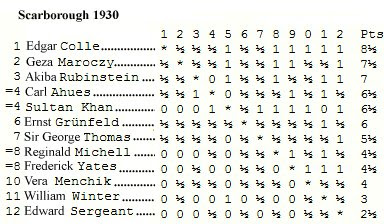 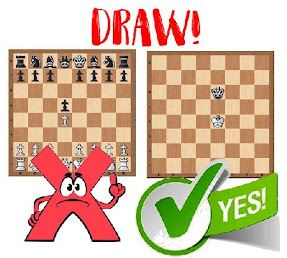 The scourge of the GM draw where the players engage in a short, uncontested game and quickly agree to a draw is alive and well. For a long time organizers have been struggling with ways to combat these draws such as forbidding players from drawing before 30 moves have been played or declaring that the offer had to first be approved by a tournament referee.
Nothing has ever been very effective, but perhaps the 2020 US Championship (won by Wesley So with a score of 9.5-1.5, a half point ahead of Jeffery Xiong) had the answer. The tournament format was a round robin rapid event that was played from the players' homes under the supervision of arbiters. The time control was 25 minutes per game with a 5-second increment.
There were no egregious draws... the shortest was a 23-mover in the last round between Moradiabadi and Ramirez Alvarez. There were also a 119-mover between Liang and Lenderman and the Nakamura vs. Lenderman game was agreed drawn only after a 144 moves had been played!
Of course one of the greatest attackers of all time, Mikhail Tal (1936-1992), played his fair share of GM draws, but the following game against Lev Aronin wasn't one of them.
Lev Aronin (1920-1982) played in eight USSR Championships, which were the strongest tournaments in the world during his era and he placed as high as a tie for 2nd–4th places in 1950 at Moscow. He was the youngest of three brothers, with Gregory (1913–2007) being the eldest, and Efim (1915–1989) being the second. Gregory taught him chess at the age of 8, and he could recall that at the age of 14, Lev beat him and Efim simultaneously in blindfold games. Aronin, a meteorologist by profession, never played outside the Soviet Union.
The below game was played in the 24th Soviet Championship which took place in Moscow is 1957. It was the 20-year old Tal's debut and it brought him to international attention not just because he won it, but because of his attacking style. 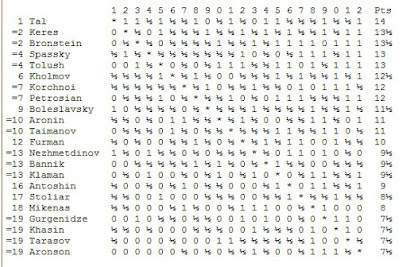 Sidebar: When analyzing games I occasionally mention "Shootouts." You can read my post about them HERE.