The chess world lost two players in 1924. In Berlin on January 31st Curt von Bardeleben (1861-1924, 62 years old), who was living in abject poverty, either accidentally fell out of or committed suicide by jumping out of the second floor window of his boarding house. Later in the year, on September 1st, Joseph H. Blackburne (1841-1924, 82 years old) died in London.
The spring of 1924 saw the famous international tournament in New York. On March 21st, Richard Reti handed Capablanca his first defeat since February 10, 1916 after he had played 63 straight undefeated games, winning 40 and drawing 23. The tournament was won Emanuel Lasker ahead of Capablanca and Alekhine.
In other news, Secretary of the Interior Albert B. Fall and oilmen Harry Sinclair and Edward L. Doheny were charged with conspiracy and bribery in the Teapot Dome scandal which involved the secret leasing of Federal oil reserves.
Fall and members of his family received from an unknown source more than $200,000 in Liberty bonds...that's over $3.1 million in today's dollars. It wasn't until 1931 that Fall got slapped on the wrist with a year in jail. The oilmen were acquitted of bribery, but Sinclair did 6-1/2 months in jail for contempt of court and the U. Senate. Secretary of the Navy, Edwin Denby, had signed all the leases, but he was cleared of all charges. I guess the question then is, who gave Fall the Liberty bonds? We can guess can't we?
Equally intriguing was when two wealthy students, Nathan Leopold and Richard Loeb, kidnapped and murdered 14-year-old Bobby Franks in Chicago in May of 1924 in an attempt at committing a perfect crime.
They entered a guilty plea and the trial reached its climax with Clarence Darrow's closing argument which took him 12 hours and was delivered in a sweltering courtroom. Darrow admitted the boys were guilty, but argued that forces beyond their control influenced their actions. Basically Darrow argued the Nature made them do it, evolution made them do it, Nietzsche made them do it. Consequently, they should not be sentenced to death for it. So convincing was he that Leopold and Loeb received life in prison and not execution by hanging which was the form of execution used in Illinois until 1928. The last person to get hung in Illinois was gangster Charles Birger the same year. You can read all about him HERE.
Richard Loeb didn't last long in prison. He was killed in 1936 in a prison fight with another inmate. In 1958, after serving 34 years Nathan Leopold was paroled and found work as a medical technician in Puerto Rico.
He earned a master's degree at the University of Puerto Rico, then taught classes there; became a researcher in the social service program of Puerto Rico's department of health; worked for an urban renewal and housing agency; and did research on leprosy at the University of Puerto Rico School of Medicine.
Leopold was also active in the Natural History Society of Puerto Rico, traveling throughout the island to observe its bird life. In 1963, he published Checklist of Birds of Puerto Rico and the Virgin Islands. He died of a heart attack related to diabetes at the age of 66 in 1971.
In Detroit, Michigan between August 23 and September 2, 1924, a 19-year-old Mexican player named Carlos Torre swept through a strong field and won the Western Open with an undefeated performance 2.5 points ahead of the field.
Twelve year old Samuel Reshevsky missed his chance at finishing in second place all by himself when he lost his last round game, a R and P ending, to the nefarious Norman Tweed Whitaker. 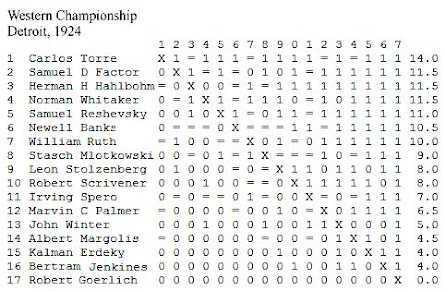 In the following game Reshevsky pulls off a nice finish against Kalman Erdeky (1879-1942, 63 years old) of Pennsylvania. Erdeky was born in Senica, a town in western Czechoslovakia and came to the US in 1904. His name comes up in a two part article in the 2008 Pennswoodpusher  Part 1  Part 2