The following game in which Hodges absolutely smashed Pillsbury was played in the 1st City Chess Club tournament which took place in the Cafe Manhattan on Second Avenue in New York City.
When the game was played on December 19, 1893, the weather was clear and in the upper 20's, rising to the lower 30's. The Brooklyn Daily Eagle of that date had several interesting stories, one of which was front page news.
A wealthy Englishman, a Wall Street speculator and wine merchant named Louis A. Morganthal, was found dead in his apartment in the Graham House, an apartment filled with moneyed residents whose names frequently appeared in the newspaper society columns.
He was found by his wife, Minnie Morganthal, whom the paper described as "a sweet-faced woman with a mass of black, flowing hair," adding that "she looked like a Jewess." Obviously that was in the days before political correctness!
Apartment residents said they were a quiet and seemingly happy couple, but nobody knew what business Mr. Morganthal was in. It was only when a snooping bellboy arrived at the scene and discovered a telegram in the wastebasket that was on stock exchange letterhead and blabbermouthed the contents to friends that it was discovered what he did. In the telegram Mr. Morganthal stated that all was well and he had made $100 on the election.
Minnie was the daughter of a London diamond merchant who had made a fortune from the African diamond mines. The evening of the 18th Minnie had celebrated her 22nd birthday by attending the theater, but not with her husband; she was escorted by another Englishman named Mr. Noeltz.
Louis Morganthal arrived at the apartment around 9:30pm on the 18th "a bit tipsy" and invited several people in for a drink. He “was in a talkative mood,” and “said his wife was the best woman in the world.” At 11:00pm he retired for the evening.
When Minnie returned home around 1:00am on the 19th and went upstairs she found her husband sitting in a chair with a 22-caliber bullet hole in his head. It was ruled suicide.
The odd thing is, less than five months later a guy named Max Meyer of Selma, Alabama arrived at the Graham House with his male nurse and his married daughter. He had come to New York seeking help from a specialist in nervous disorders and had suffered from insomnia for several years.
His two sons, one of whom lived in New York, decided to place their father into an asylum. When Meyer discovered the plans, before his nurse could stop him, he jumped up and dived out of the window.
In other news, in my home state of Ohio, it was pointed out that in the small town of Wellington (about 45 miles SW of Cleveland) a school teacher named Minnie Cleghorn was a second cousin to Queen Liliuokalani, the only queen and the last sovereign monarch of the Hawaiian Kingdom. A relative of Ms Cleghorn had married into the family.
Then, heading about 35 miles SE of Wellington, in the city of Wooster, Ohio, Delia Sloane, the oldest woman employed by the government died. She was the daughter of John Sloane, Treasurer of the United States under President Zachary Taylor in 1853.
The legendary Albert B. Hodges (July 21, 1861 – February 3, 1944) was born in Nashville, Tennessee. He was one of the most well-known American players of the late 19th and early 20th centuries because he played an important role in transforming chess from a pastime into a social institution. Hodges died of a heart attack at the age of 82 at his Staten Island home on February 3rd, 1944.
After losing a US Championship match to Jackson W. Showalter by an 8-9 score in 1894, he won a re-match the same year (5.5-3.5) and so became the US Champion, but he never defended the title. Pillsbury challenged him in 1895, but Hodges declined for business reasons and announced his retirement in 1896.
Hodges learned chess when he was 19 and at the age of 28 moved to New York. There he became the hidden operator ofAjeeb, the Chess Automaton, playing all comers at chess and checkers. Shortly thereafter, he won the championship of the Manhattan Chess Club and also became State Champion.
He took part in all thirteen of the cable matches with England without losing a single game. He founded the Staten Island Chess Club and served as its President for 12 years Outside of chess.
Hodges was an accountant and he also served as the secretary for Sailor's Snug Harbor, a collection of architecturally significant 19th-century buildings on Staten Island.
With all this going on, the tournament and Hodges victory over Pillsbury received scant coverage. At the end of the tournament the paper did mention that the 21 year old newcomer had been the favorite for first notwithstanding the number of strong players in the event. The paper added that his victory had earned him the title of the "Morphy of the North." 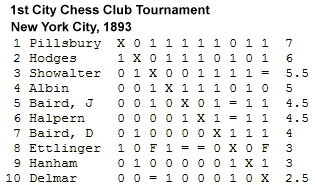 The paper predicted a great future for him and added that he was also a fine checker player, "being, in fact, one of the best exponents of the game in this country."

The December 30, 1893 edition of the Eagle mentioned that Clarence H. Freeman (1859-1909) of Providence, Rhode Island, who was a checker player of renown, stated that Pillsbury was "very expert and hard to beat" in checkers. Some sources say that Freeman was of Indian and African descent and others list him as being a full blooded Pequot Indian. He died at the age of 46 in a Providence hospital after a six week illness with bladder trouble.