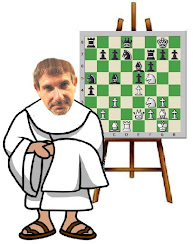 My copy of Jeremy Silman's How To Reassess You Chess was purchased when it came out in 1993. That was back when malls had bookstores and one of the stores I frequented actually had a nice supply of chess books. Unfortunately Silman's widely acclaimed book came out too late to do me any good because by the time it appeared I was an old dog and was not interested in learning any new tricks.
While thumbing through the book the other day I was intrigued by one of the positions and without Silman's clear explanations a number of his moves are hard to understand.
Let's take a look at the game which appeared in the chapter on preventing counterplay. Silman's opponent was National Master Zaki Harari and the game was played in a tournament in memory of Charles Bagby (1903-1973).