A Difference Of Opinion 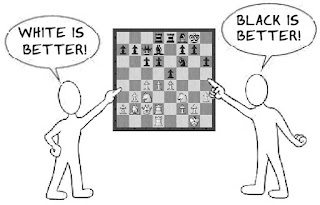 A while back while thumbing through Purdy's The Search for Chess Perfection I noticed an interesting diagrammed position in the section containing a selection of Purdy's games.
The Australian IM, Correspondence GM and writer Cecil John Seddon Purdy (March 27, 1906 - November 6, 1979) was the winner of the first world correspondence championship. An excellent analyst, he was an influential chess magazine writer, editor, and publisher.
Purdy began his chess career at the age of 16 and soon decided to become a full-time chess writer and player. Initially strictly an OTB player he also added postal play. He was a four-time winner of the Australian Championship (1935, 1937, 1949, and 1951) and he won the first two Australian Corresponence Championships (1938 and 1945). He also won the New Zealand Championship in 1924/25. In 1952 in Auckland Purdy drew a match with Ortvin Sarapu, at the time by far the best player in New Zealand and they were thus declared Australasian co-champions.
Purdy had two children, Diana, and John (1935–2011) who won the Australian Championship in 1955 and 1963. Diana was also a player and she was married to the leading New Zealand player Frank Hutchings in 1960.
Purdy founded and edited the magazine Australasian Chess Review (1929–1944) which became Check (1944–45) and finally Chessworld (1946–1967). He was described by Bobby Fischer as being a great chess instructor.
His opponent in the following game was National Master Frank A. Crowl, who was described as the Australian Nimzovich because he was a player who "cared absolutely nothing for orthodox theories" and even went so far as to claim the perfect game would be won by black! Crowl once stated, "I have nearly reached the conclusion that this is the only opening left now which offers white winning chances." The opening he was referring to was 1.b4!
Crowl was born in Melbourne in 1902, but spent his boyhood in Shanghai where he won the junior championship at the age of 10 and again at the age of 11. At the age of 14 he won the major championship of Shanghai.
Not long thereafter and through his late teens he lived in London and played top board for his team. His early twenties saw him seeing most of the world, sailing as a stowaway when his money ran out.
Finally, in 1927, at the age of 25, he settled in Brisbane and suddenly resumed his chess activities. His absence from the game had caused his play to deteriorate to the point that he was accepting Pawn and move odds from Brisbane's best player, 20-year old Gary Koshnitsky. In a few months he had regained his strength and in 1928 he was back in Melbourne where he won the city championship. He passed away in 1965.
As for the following game it shows how differently two masters can judge the same position. Purdy thought black had absolutely nothing after move 16 and that white stood much better. From Crowl's point of view, he had a good position and it was his optimism that caused him to play the rash 16...g5 that ultimately lead to his defeat.