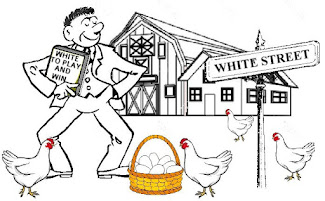 Arnold Denker described Weaver W. Adams as a “white man clear through.” He lived in a white house on White Street and had inherited a chicken farm on which he raised white chickens that laid white eggs. He also wrote, among other titles, White To Play And Win which he published in 1939.
Adams explained his theory starting with the idea that in the writings of nearly all leading players there is implied belief that a perfectly played game would be a draw. This, he said, was because the symmetry of the positions before the first move is made would make the draw seem a logical outcome. He added that it was also widely presumed that the many of the drawn games between top players was accounted for by the fact that they played nearly to perfection.
Adams pointed out that such reasoning was inconsistent with the well-recognized fact among masters that the slightest mistake could change the outcome.
In White to Play and Win he claimed a forced win with the Bishop's Opening (1. e4 e5 2. Bc4), but when his theory failed to work out in practice he switched to the Vienna Game in which he claimed a win for white after 1. e4 e5 2. Nc3 Nf6 3. Be4 Nxe4, a variation known today as the Frankenstein-Dracula Variation. That didn't work either work either so not being a man that was easily discourage, he switched to other lines.
In both of his controversial books, White to Play and Win and Simple Chess, Adams stoutly maintained that white's initiative is sufficient to turn the game in his favor. While he believed that black has theoretically no chance of winning, Adams pinned his hopes on unconventional defenses like the Albin Counter Gambit and he imbued any opening with his own pertinacious fighting spirit.
He had little success in international play, but in national events he succeeded in beating, with the exception of Reshevsky and Fine, all the top American players of the day. Adams was hard to discourage. In the 1940 US Championship he played a slashing attack against Albert Simonson only to miss a sensational mate and lose. Undaunted, he met Kashdan a few rounds later and won the brilliancy prize with an even more brilliant attack.
His most famous result was probably winning the 1948 US Open in Baltimore. He got off to a slow start, losing to Carl Pilnick and drawing with Norman Whitaker, but a staunch apostle of aggression, he then went on to win seven and draw two of his last nine games. In the last round he fought off a determined challenge by Olaf Ulvestad and secured the draw which was all he needed to clinch first place. 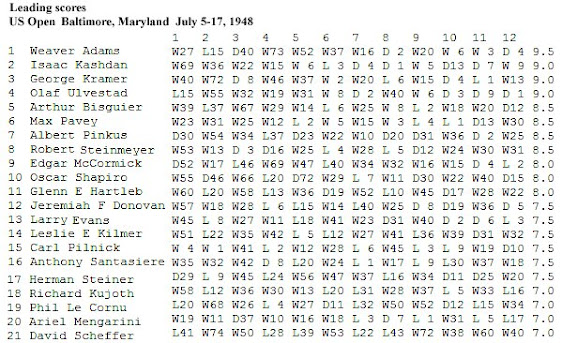 Defending titleholder Isaac Kashdan, George Kramer and Olaf Ulvestad finished in a triple tie. The tie-breaking rules failed to separate Ulvestad and Kashdan but Kramer was relegated to fourth place. Max Pavey's result was discouraging because of his hard luck; he missed good winning chances against Adams and Ulvestad.
In the following game Adams whips Anthony Santasiere, himself a somewhat controversial player. He, too, was an original thinker who, like Adams, was often dogmatic and he exaggerated the value of novelties and sometimes insisted that it took bizarre moves in the opening in order to play “Romantic” chess.
In the 1970s I believe it was, he got into a written feud with Larry Evans after Evans showed disdain for Santasiere's hypocrisy for “talking like a tiger and playing like a Tigran (Petrosian).” Evans did admit Santasiere had the heart of a Romantic even if he didn't have the games to back it up.
In the Game of the Month column in the January 1942 issue of Chess Review, a querulous Reuben Fine presented a game Santasiere lost with his Santasiere’s Folly (1.Nf3 and 2.b4) all the while poking fun at the opening. It no doubt was sour grapes on Fine’s part because in the 1938 US Championship Samuel Reshevsky finished first with an undefeated 13.0 while Fine was second with 12.5 (their individual game was drawn). Fine lost one game and that was to Santasier, who finished tied with George Treysman down in tenth place out of 17.