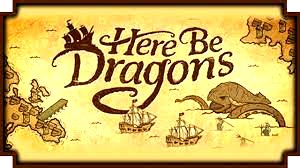 "It's my style to take my opponent and myself onto unknown grounds. A game of chess is not an examination of knowledge, it is a battle of nerves." David Bronstein
At the height of his powers there was no formal rating system, but between about 1945 to 1959, David Bronstein (February 19, 1924 - December 5, 2006) was undoubtedly one of the strongest players in the world. Chessmetrics puts him at number one in the world 19 different months between the June 1950 rating list and the December 1951 rating list.
His 12-12 score against Botvinnik in the 1951 world championship match confirms Bronstein's strength. He never again achieved that level of play, but he continued to be among the world's best players up until about the mid-1970s.
During his career he was known for opening experiments and being a creative genius and master of tactics. Regarding his opening play, Bronstein wrote that he tried to vary his openings "as much as possible, to invent new plans of attack ans defense, to make experimental moves which are dangerous and exciting for both players and also for the audience." 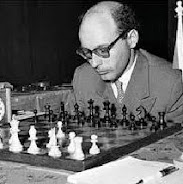 He also wrote, "Probably if I were to play more safely I would make more points in every tournament, but then where is the joy in that?" What more could you ask for in a great player?! Few, if any, of the world's best play like that these days.
The following game was played in the Soviet Championship held in Tallinn, Estonia from November 21 to December 24, 1965. It featured twenty of the Soviet Union's strongest players, including reigning champion Viktor Korchnoi who performed well below expectation, ending up with a minus score. 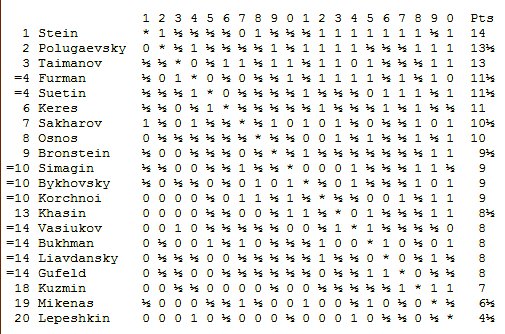 Regarding this game, Bronstein noted that the Old Indian is not very popular because black's B on e7 does not seem to have a bright future. However, the defense is solid and very playable.
He explained black's idea as follows: "The advantage is that if white's P marches to h5, it will not encounter the g-Pawn as it would in the King's Indian Defense. If this h-Pawn comes to h6, black can play ...g6 and the h-file is still closed."
He described how in this game he tried to increase the activity of his dark squared B with the maneuver ...Be7-d8-b6. And, in order to accomplish that he had to retreat his Q to c8 and in order to do that, his B had to go to d7 first.
But, Bronstein added, there is more. This plan took away the usual square of d7 for his b8N. Consequently, the N had to temporarily be placed on a6 for where it later joined the attack from c5.
He offered all this as evidence that such a simple maneuver requires careful planning and coordination of several pieces.
Bronstein, unlike some annotators of this game, gave his opponent some credit by pointing out that the time lost by black in carrying out such a maneuver was cleverly used by Mikenas by organizing an attack using his f-Pawn. All in all, Bronstein packed a lot of instruction into 24 moves!