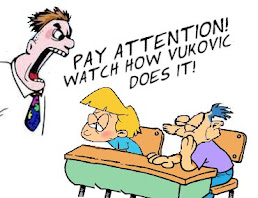 Vladimir Vukovic (August 26, 1898 -November 18, 1975) was a Yugoslav (Croatian) chess writer, theoretician, player, arbiter and journalist. Chessmetrics assigns him his highest rating of 2559 on its rating list of August 1926 placing him at number 33 in world.
Vukovic edited the monthly chess magazine Sahovski Glasnik (Chess Journal), the official periodical of the Yugoslavian chess federation. Although he authored Razvoj sahovskih ideja (The development of chess ideas) and The Chess Sacrifice, he is best known today as the author of the widely regarded classic The Art of Attack in Chess, which expounds the both the basic principles as well as complex forms of attack on the King. If you've never read the book it's worth the investment even if it does contain analytical errors which are readily pointed out by engines. That doesn't really matter because the book shows you ideas that work against humans.
At Debrecen 1925, Hans Kmoch had what was probably his finest result, winning by a margin of 1.5 points. He and Geza Nagy were the leaders at the halfway point with 4.5-1.5 scores, but then both lost in round 7 and Johner took over the lead, but then he ended up falling back after drawing with Gruenfeld and losing to Tartakower.
In round 8 Nagy and Kmoch drew against each other giving both of them a score of 5-3. Then something amazing happened! Kmoch won 5 games in a row while Nagy lost 5 in a row!
It was an odd tournament in that only five players finished over 50 percent while nine of the players finished with minus scores. 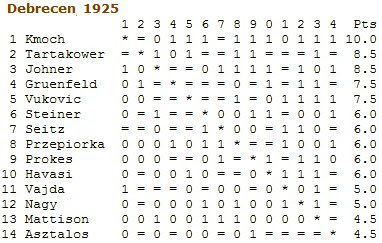 In the following game Vukovic demonstrated how to conduct a classic attack using a Rook to control the open h-file.