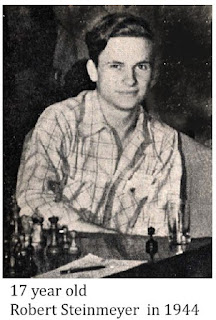 Few readers will remember the name of Robert H. Steinmeyer (1927-1988, 61 years old), but from the 1940s through the 1970s he was Missouri’s best player.
Born in St. Louis, Steinmeyer won the Missouri State Open Championship in 1942, shortly after his 15th birthday. Then shortly after turning 18, he dropped out of high school and enlisted in the Army and served the remaining years of WW II. While on leave from the Army he won the Missouri State Championship in 1946. After his discharge as a Private First Class, he entered Washington University and graduated in 1951. Steinmeyer lived all of his life in St. Louis where he worked for commercial barge lines.
In days gone by the St. Louis District Championship was a round robin to which the area’s strongest players [usually 8] were invited and it was played at the rate of one game per week. Steinmeyer won the championship ten times (1944, 1945,1947, 1948, 1949, 1950, 1951, 1953, 1960 and 1961).
As one of the country's top rated players he was often invited to play in the US Championship, but only accepted the invitation to three (1962, 1963 and 1964). As a teenager he started playing postal chess with Chess Review and eventually became one of their top players on a par with Hans Berliner.
Steinmeyer, who was also an active Bridge player and a member of the St. Louis Opera Guild (a volunteer organization committed to the growth and success of opera), gave up chess sometime during the mid to late 1970s.
At the 1944 US Open in Boston, Reshevsky scored 15.5-1.5 to finish a full three points ahead of his closest rival, Anthony Santasiere. It was in the final round that Reshevsky sat down with the intent of enjoying himself and went on a rampage in his famous game against Arnaldo Vasconcellos of the Brazilian Consulate in Montreal. In a brilliant display of fireworks, Reshevsky sacrificed three pieces and crushed his opponent with an overwhelming attack.
However, it was the 17-year old Steinmeyer who stole the show by tying for third with veteran E.S. Jackson, Jr. with 12-5 scores. What made Steimeyer's feat all the more remarkable was that although he was Champions of St. Louis this was his first time in a national event and his high place was impressive as he finished ahead of several seasoned players. He lost only two games; he put up a stiff fight against Reshevsky and he was also defeated by Roger Johnson, a strong master from Pennsylvania who at the time was a Sergeant in the US Army.
One of Steinmeyer's best games was his brilliant crush of Neil Bernstein (1916-1967, 51 years old). According to Chess Scotland historian and archivist Alan McGowan it's likely that Bernstein was the same person who was briefly a student in Scotland.
He went to Scotland in March of 1937 to study medicine at Edinburgh because at the time there were limited places for Jewish students in US medical schools. Bernstein played in the Scottish Championships of 1938 and 1939. The 1939 championship included two other American players, Louis Geronimus and Max Pavey; that year Pavey won the Scottish Championship.
In July of 1939, Bernstein returned to the United States and never went back to Scotland because of the outbreak of WWII. After the war he continued his medical studies at Middlesex University in Massachusetts.
The only additional information I could find on Bernstein was that in 1949 he was living in the Flatbush area of Brooklyn, New York. That year he participated in the US Open in Omaha, Nebraska where he finished with a score of 6.5-5.5 and tied for places 21-28 out of 70 players.