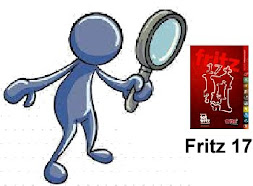 I want to do a very brief review of Fritz 17. I was recently given a copy of it and was excited because...well, it's a lot newer that my old Fritz 12 which dates back to somewhere around Windows 8 and 2004! I found Ftitz 12 on sale at Office Max for $20 and it's been my "go to" program ever since.
For this blog all analysis is done using Fritz 12 with the engines Stockfish and the free Komodo 12. Then Aquarium 2014 is used to post the game in the blog. The two-step posting is necessary because the excellent KnightVision site no longer works and for one reason or another I found other methods of posting the games on this blog unsatisfactory.
I don't need any of the engines that come with Fritz 17 because Stockfish 14 and Komodo 12 are free and much stronger. Among the engines included are Fat Fritz and Leela Chess Zero (also known as Lc0, LCZero, and Leela). The latter is an open-source neural network (NN)-based chess engine.
Fat Fritz used the Leela engine without functional changes and was marketed as if it were an innovative engine, instead of being just a renamed Leela. The description of Fat Fritz implied it was stronger than Stockfish and Leela, but it's not. The comparison they made used an old version of Stockfish.
Then they came out with Fat Fritz 2 which is nothing more than a tweaked version of Stockfish and it got them sued. That's not to say Fat Fritz 2 is a bad engine because on the CCLR 40/15 rating list it is rated number 2 behind Stockfish 14. Against Stockfish Fat Fritz 2 has scored +0 -1 =62.
I'm not interested in 3D boards with ray tracing...according to ChessBase this "calculates and shows light reflections from surface to surface in all of the incredibly complex relationships such as sunlight bouncing off a wall, which gives a lighter light, filtered through humid air, and so on. ChessBase has now introduced this added layer of realism to its 3D boards, with full control over every aspect if such is your desire."
Playing and training online on Playchess is not something I am interested in either, nor am I interested in all the many features designed to learn openings.
Despite the fact doing a full analysis returns a tremendous amount of information, it turns out that, for me, it's also Fritz 17's biggest disadvantage!
By the way, it gives a nice little report at the end that shows how accurate the play of both sides was. I'm not quite sure how it works, but it looks like this. The snapshot was taken from a recent online game that I won. 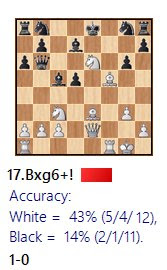 By comparison, a quick (5 seconds per move) analysis of the famous Immortal Game between Anderssen and Kieseritzky, London 1851, showed white's accuracy "score" to be 38 percent and black's to be 20 percent. It has long been known that this game, while entertaining, is far from being "Immortal" which explains the low scores.
After doing an analysis with Fritz 17, saving it (as PGN) and then opening the game up with Aquarium 2014, it turns out that although the game displays fine in Aquarium, it will not work properly when pasted into Blogger.
Conclusion: The program has a lot of bells and whistles I am not interested in. Some features are useless and some seem designed to steer you towards their website so that you would create an account there. On the other hand, it does have many excellent training and analysis features, but nothing that can't be found in other, cheaper, programs. For full details of all the program can do you can take a gander at the manual HERE.
For now, my old Fritz 12 and Aquarium 2014 coupled with free engines get the job dome simply and efficiently.
Posted by Tartajubow at 7:46 AM