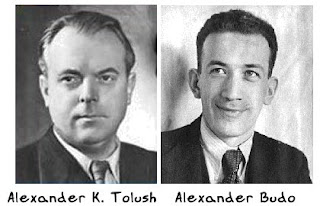 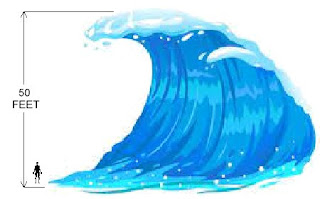 You didn't want to be living in New England in 1938. A tropical storm near the Cape Verde Islands in early September turned into a hurricane and was expected to hit Florida, but on September 19th it made an unexpected change of course and headed parallel to the Atlantic Coast.
Then with little or no warning it made landfall as a Category 3 storm near Long Island, New York at about 2:30pm on September 21st with sustained winds of 120 MPH, 15 ft. storm surges and 40-50 foot waves...waves equal to a three story building! The storm battered New England, southern Connecticut, New York City, Massachusetts, Rhode Island and New Jersey, dissipating when it reached Canada by September 23rd.
Over in Russia they had established a qualification system for its national championship and the semi-final tournaments for the 1939 championship were played in 1938 in Leningrad and Kiev (won by Vasily Panov).
In Leningrad the two-time champion Mikhail Botvinnik romped to victory by a two-and-a-half point margin. In 100 Selected Games he explained that the reason he was playing was because he had hardly played in 1937 because he had been pursuing his academic degree, and wanted to get some practice. 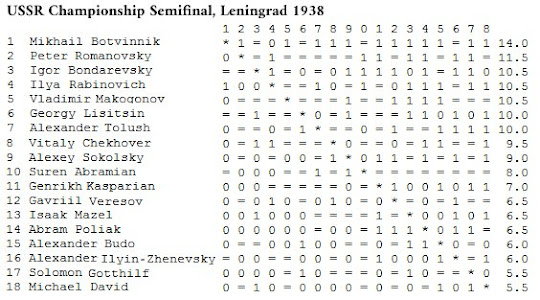 Igor Bondarevsky challenged him for six rounds or so, but then faded and thereafter Botvinnik lead by at least 1.5 points, finishing with 3.5 points in his last four games. Botvinnik's feat left the real battle for second place. Bondarevsky held it for about 12 rounds, but then lost three of his four games in rounds 13-16. That opened the door for Alexander Tolush and Vladimir Makogonov, but after they lost to Botvinnik in the last two rounds Peter Romanovsky sneaked into second.
GM Alexander Tolush (1910-1969) was Spassky’s trainer and it was he who enhanced Spassky’s attacking play. Tolush was the Leningrad Championship in 1937, 1938, 1946, and 1947 and played in the USSR Championship ten times. His best result was second place (+8=6−3 shared with Aronin and Lipnitsky) in 1950. His best international result was first place at Bucharest 1953, where he finished ahead of Petrosian,Smyslov, Boleslavsky and Spassky.
Tolush was an imaginative master of attack, but his play was never sound enough to enable him to reach the highest levels. His opponent in the following game was Alexander S. Budo (1909-1982), a Candidate Master who held high posts in management of city buildings and conducted chess classes.