Whatever Happened To Ion Balanel? 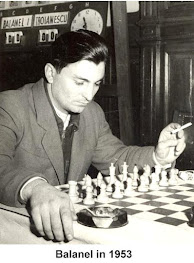 Ion Balanel was a Romanian International Master. In the 1950s he was one of the strongest Romanian players winning the Romanian Championship four times (1950, 1953, 1955, 1958). He also won four gold medals (1950, 1953, 1955, 1958) and two bronze medals (1951, 1954) in the Olympiads and twice participated in Zonal (1951 and 1954).
Balanel, who was born June 7, 1926, is listed as still being alive on several sites and we are informed that in 1958 he was virtually excommunicated from his chess club and put in a lunatic asylum by the Communist regime. A Romanian site I visited stated that he retired prematurely because of health reasons and died under unexplained conditions, but no date was given. However, the site had a pencil sketch of WIM Rodica Reicher that Balanel drew in 1961.
His opponent in the following wild, see-saw game was Romanian master Mihai Radulescu (1913-1980, 66 years old). The opening was the Frankenstein-Dracula Variation of the Vienna game...a variation that involves great complications and requires accurate play by both sides. 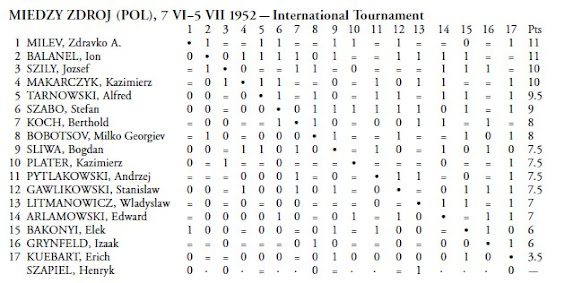 The variation was given its name by Tim Harding in his 1976 book on the Vienna Game, in which he said that the bloodthirstiness of the character of play was such that "a game between Dracula and the Frankenstein Monster would not seem out of place." Long ago Weaver Adams even suggested that it wins for white.