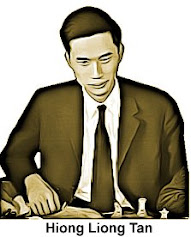 Shortly before the Hastings Christmas Tournament of 1962/63 began the US and Cuba reached an agreement to release the Bay of Pigs captives that were held in Cuba after President John F. Kennedy's bungled backing of the invasion.
In Ohio, the state ended its lawsuit against the Cincinnati Reds baseball team when they agreed to stay in Cincinnati for 10 years. They're still in town.
The team was the target of an interesting lawsuit back in 2017. They were sued by a woman and her husband after she took a foul ball to the face two years previously and it resulted in a concussion, dental injuries causing loss of teeth and resulting in surgery, headaches, right hip sprain, severe pain and suffering, incurred medical expenses, lost wages and "sustained a loss of the enjoyment of life.”
She claimed that the team knew or should have known of the risk of injury to fans caused by foul balls. The suit was voluntarily dismissed. With good reason...ticket holders assume all risks incidental to the game, including, but not limited to, the risk of objects leaving the field of play, including bats and bat fragments and thrown or batted balls.
Before the Hastings tournament ended on January 5th there were three college football games in the US: in the Rose Bowl, Southern California beat Wisconsin, 42-37; in the Sugar Bowl, Mississippi beats Arkansas, 17-13; and in the Orange Bowl, Alabama beat Oklahoma, 17-0. No game was played in the Toilet Bowl in Flushing, New York.
The Christmas of 1962 was the last one I would spend at my parents home until 1967 due to military service as a Navy Corpsman serving with the Marines.
The 38th Hastings Christmas Congress was held from December 27, 1962 to January 5, 1963. Two foreign competitors were untitled but promising young players, Hiong Liong Tan (aka Tan Hoan Liong or H.L. Tan) from Indonesia and Drazen Marovic from Yugoslavia. 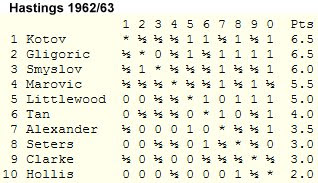 The tournament began inauspiciously when icy roads prevented some players from arriving on time and a couple of games had to be postponed. Marovic had a promising start and was in contention for first, but he finished with with three draws against players in the bottom half (Tan, Hollis, and Van Seters) and ended up in fourth place.
Hiong Liong Tan (1938-2009) was an Indonesian-Dutch master who was the first Indonesian and one of the first Asian chess players to hold the IM title.
Tan moved from Indonesia to Amsterdam in 1956 to finish high school, after which he went to study Insurance Mathematics. His first foray in chess was a 31 move loss in one of Botvinnik's simultaneous games in 1958.
He played for Indonesia (4th board) in the 1960 Leipzig Olympiad and won an individual gold medal (+14 –1 =5). He won the Dutch Championship in 1961 by defeating GM Jan Hein Donner in the process. Then in 1962, he was co-winner (with Moshe Czerniak) of the IBM international tournament at Amsterdam. He was awarded the IM title in 1963 after scoring 7.5-9.5 at Hoogovens. Tan also had a dan rank (ranks for advanced amateur players) in Go.
The 1962/63 Hastings tournament was Tan's last because not long after he was hospitalized for schizophrenia and alcohol addiction. His parents came and escorted him back to Indonesia where he initially lived in a clinic. After his parents' death, he returned to his birthplace of Bogor, where his family had built him a house.
His opponent in the Following game was the British player A.S. Hollis (1940-2013). Hollis was a distinguished classical scholar and during his academic career his research focused mainly on Hellenistic and Roman poetry In chess he was an English correspondence GM (title awarded in 1976). He was British Correspondence Chess Champion in 1966 (jointly), 1967, and 1971. In 1982-87 he won the Ninth Correspondence Chess Olympiad, and in 1998 the World Postal Championship as a member of the British team.