A Snappy Finish by George Atwood 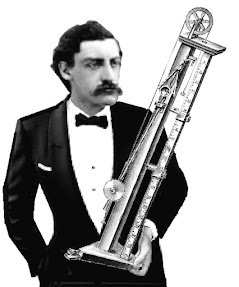 George Atwood, an English mathematician, was a Fellowship of the Royal Society, an award granted by the judges of the Royal Society of London to individuals who have made a "substantial contribution to the improvement of natural knowledge, including mathematics, engineering science, and medical science."
Atwood was born in 1745 according to some or in 1746 according to historian H.J.R. Murray. He graduated from Trinity College in Cambridge in 1769 after which he stayed and taught mathematics there. In 1776 he was elected a Fellow of the Royal Society.
In 1784, he left Cambridge and soon afterwards William Pitt (the Younger), who had been one of Atwood's students, appointed him a job as a patent searcher of the customs, which required little of his time and enabled him to devote a considerable portion of his time to mathematics and physics.
The same year he left Cambridge Atwood authored a book on on Newtonian mechanics (A Treatise on the Rectilinear Motion) in which he introduced his Atwood machine for illustrating the effects of Newton's laws of motion concerning the uniformly accelerated motion of a free-falling body due to gravity. He also did work of the theories of ship stability as well as the engineering of arches and bridges.
Additionally, he was awarded the Copley Medal of the Royal Society. The Medal is the most prestigious award give by the Royal Society of London. Other recipients included Ben Franklin, Albert Einstein and Max Planc.
As a chessplayer Atwood was a decent amateur who played many games against Philidor and fortunately for the chess world he preserved some of them which was an unusual practice at that time. The custom of recording and saving games really began in 1836 when William G. Walker published the Labourdonnais-McDonnell match which he helped record in 1834.
Historian Murray wrote "I do not know in what year he joined the (London) chess club, but already, in 1787, he was recording games in his notebooks."
When Atwood passed away he left his chess notebook to English player Joseph (some sources give his name as Jonathan) Wilson. When Wilson passed away in 1833, Atwood’s notebook was bought by the English player George Walker.
Walker published The Celebrated Analysis of A.D. Philidor, the Art of Chess-Play: A New Treatise on the Game of Chess, A Selection of Games at Chess played by Philidor, Chess Made Easy and Chess Studies. Atwood died in Westminster at the age of 61 and was buried there at St. Margaret's Church.
Over a century later, a small lunar impact crater was named Atwood in his honor.