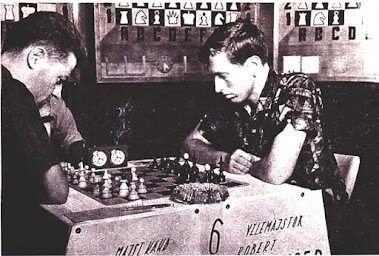 Skopje 1967 was the first in a series of international tournaments and featured a field of twelve Yugoslav masters plus six foreign players. It held some excitement because Fischer, who had just recently come out of hiding, was using it as a warm-up for the Sousse Interzonal later in the year where he famously walked out while leading.
At Skopje Fischer lost his second round game to Geller, but after nine rounds he had succeeded in reaching a tie for first with Kholmov. At that point, being the obnoxious snot face that he was, Fischer announced he would withdraw from the tournament unless the chess sets were changed and spectators were not allowed for the remaining rounds. The organizers would not meet the second demand so Fischer forfeited his tenth round game against Yugoslav master Milorad Knezevic.
The gracious Knezevic didn't want to accept a free point and allowed the game to be rescheduled for the next rest day; it ended up drawn. After that, Fischer went on to win the tournament.
In spite of his threat to withdraw and his unreasonable demand to ban spectators, Fischer's request to replace the sets seems reasonable. In the photo of him playing against Ilievski if you look closely you can see the sets would be considered non-standard by by most players. Also note this is a rare instance of Fischer playing without being in a suit. 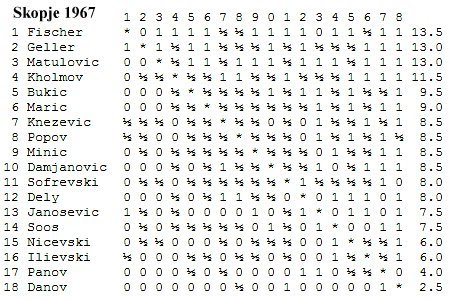