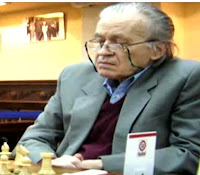 Recently I played an interesting game online using the Cornstalk Defense (1...a5) and was going to do a post on it, but in the process of making the annotations I came across the game Contin-Larsen from the 2008 Magistral Internacional Ruibal tournament in Buenos Aires. Larsen lost that game and when I investigated further I discovered that it was played in his last tournament.
Larsen often played “weird” openings, but he was an incredibly strong player and so could get away with it.  From the 1950's to the 1970's he was at the height of his career, but was overshadowed by Fischer.  Of course, so was everyone else. There's no question that from 1963-1975 Larsen and Fischer were the two strongest players outside of the Soviet Union.
Larsen's accomplishments are too numerous to mention here, but if you’re looking for a good book filled with entertaining games and outstanding annotations then I can highly recommend Bent Larsen's Best Games: Fighting Chess with the Great Dane.
In the early 1970s, Larsen left Denmark via the Canary Islands (Las Palmas) and ended up Argentina where lived with his Argentinian-born wife. I read that he left Denmark in order to avoid paying the high taxes there.
Larsen (March 4, 1935 – September 9, 2010) continued to play despite his advancing age. He suffered for a number of years from diabetes and as early as 1999 it was clear he was experiencing serious health problems.
In 1999 he only finished 7th out of 10 in the Danish Championship and the following year he was forced to withdraw when he became seriously ill with an edema which required brain surgery.
Although he occasionally played in tournaments in Buenos Aires, by 2009 his Elo rating was down to 2415. His final tournament was Magistral Internacional Ruibal 2008 in Buenos Aires where he lost all nine games.
He died in Buenos Aires in September 2010. According to the English Chess Federation Newsletter, "His health had been poor for some considerable time and he had been virtually inactive for years" He died from a cerebral hemorrhage.
Writing of Larsen in My Great Predecessors, Garry Kasparov said of him, “I think that people like Bent Larsen are indispensable to the chess world; without them, it would be gray and grumpy,”
In his last tournament the 73 year old Larsen played bad openings such as the Grob Attack, the Cornstalk, 1.b4 and as black one game opened 1.d4 c5 2.d5 e5 3.Nc3 and now Larsen played 3...h5. How much this contributed to his failure is open to question. Was his failure the result of bad openings or had his play simply deteriorated? In his heyday he would have gotten away with such openings because he was that good.
Youtube has an interesting, if somewhat blurry, video of Larsen’s last tournament HERE.