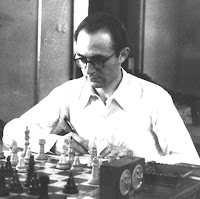 Early in 1949 Botvinnik was looking through a chess magazine and was attracted to the annotations of a game because of their bold conclusions and upon checking and rechecking the variations he couldn’t refute any of them. The game and annotations were by a young Candidate Master from Kiev named Isaac Liptnisky.
Less than two years later Lipnitsky’s name was among the leaders in 1950 USSR Championship and when the tournament was over, he was tied for second place with Alexander Tolush and Lev Aronin a half point behind Paul Keres.
Lipnitsky (born June 25, 1923) was a two-time Ukrainian champion (1949, 1956), and was among Ukraine's top half-dozen players from 1948 to 1956. He was a theoretician and professional teacher.
He learned to play chess while a schoolboy and sharpened his skills in the Palace of Young Pioneers in Kiev. From 1942 to 1947, Lipnitsky served in the Soviet Army and saw action from Stalingrad to Berlin and received several medals for valor. After demobilization in 1947, he began serious study and together with another young player from Kiev named Boris Ratner he published a collection of games by top Ukrainian players.
Lipnitsky authored one other book, Questions of Modern Chess Theory, which was published in 1956. This lost masterpiece of Soviet chess literature was called one of the most influential books ever written by by former Soviet player GM Greg Serper who wrote that it played a large part in his early development. When Quality Chess published this book in English, probably because the publishers thought the theory no longer relevant, Lipnitsky’s highly detailed analysis of the Ragozin System and his analysis of several key games in its development were not included. In its place are 10 of Lipnitsky's games against such players as Keres, Tolush, Geller and Suetin extensively analyzed by Lipnitsky himself.
Lipnitsky’s first big success was in the 1949 when he won the Ukrainian championship ahead of six masters. That, coupled with a some major successes the following year, earned him the Soviet Master title.
In the early to mid-1950s his successes began to decline and when Kotov and Yudovich published The Soviet School of Chess in Moscow in 1958, they falsely accused him of complacency and laziness.
But, Lipnitsky was neither complacent nor lazy. He died in Kiev on March 25, 1959, two months short of his 36th birthday. The cause of death was polycythemia, a slow-growing blood cancer in which the bone marrow makes too many red blood cells. These excess cells thicken the blood, slowing its flow. The disease also causes complications, such as blood clots, which can lead to a heart attack or stroke. There is no cure.
He never got the chance to compete internationally but was certainly of at least IM, if not GM, strength. He had a wide opening repertoire and his style was positional and tactics were rare. In his short career he defeated, among others, Keres, Smyslov, Petrosian, Kotov, Averbakh, Bondarevsky, Taimanov, Geller, Furman, Aronin, Suetin, Kan, and Vasiukov.