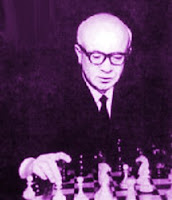 Alexander Konstantinopolsky (February 19, 1910 - September 21, 1990) was a Soviet IM and one of the country's most distinguished theorists, coaches and trainers and chess authors.
He was nearly 20 when he learned the game and soon afterwards began playing tournaments in Kiev in 1930. Two years later he won the Kiev championship ahead of many well known masters. In 1933 he was awarded the Soviet Master title for his successes in Ukrainian tournaments. Altogether he was a five-time Kiev champion.
In the following years he scored many impressive victories: he tied for third place with Lilienthal in the Trade Union Championship in 1936, tied for second with Ragozin in the 1937 USSR hampionship and tied with Bondarevsky and Kotov in the 1945 USSR Championship.
In the 1948 USSR Championship where he tied for 6th place with Keres, Bondarevsky and Lisitsyn he did not lose a single game and scored impressive wins over Keres, Lilienthal and Levenfish. In the 1950 Championship he finished in fifth place.
An all around player with an active positional style and superb defensive ability, he played endings with great precision and rarely missed an opportunity to pull off an unexpected tactical blow.
He was appreciated in Soviet circles as an excellent teacher. Widely regarded as a friendly and kindly man, during the late 1930s, Konstantinopolsky trained young players and amateurs in Kiev, at the Palace of Young Pioneers. He and Bronstein were close friends and Konstantinopolsky served as Bronstein's second for the 1950 Candidates' playoff match against Isaac Boleslavsky. Isaac Lipnitsky was also one of his pupils.
He was awarded the IM title in 1950, won the first Soviet Correspondence Chess Championship in 1951, earned the IM title at correspondence in 1966 and was awarded the Soviet title of Honorary Grandmaster title in 1983.
Konstantinopolsky had a wide opening repertoire with both colors. He, along with Boleslavsky and Bronstein, was one of the Ukrainian pioneers who developed the King's Indian Defense into prominence,. The variation had been considered suspect until the mid-1930s. During this time, Konstantinopolsky played one of the earliest games in the Yugoslav Attack against the Dragon Variation of the Sicilian Defense, a line which would become very popular about 20 years later. He also defended the Dutch Defense with success at a time when it was rarely played by top players.
Konstantinopolsky was the author of many valuable studies and articles on opening theory. He also served as a member of the Presidium of the USSR Chess Federation and took an active part in Soviet chess affairs.
He played in the Soviet Team Championship, Riga 1954, scoring 5.5-4.5; this was his last really strong performance and his OTB play seems to have largely stopped about 1955, as he concentrated more on correspondence play and on his job as a trainer and coach. Chessmetrics ranks him as 11th in the world in 1945. In 1948–1951, Konstantinopolsky won the 1st Soviet Correspondence Championship.
It appears that he played in only one tournament outside the Soviet Union. He played in the B section of Amsterdam 1966, when he was well past his prime at age 56. He scored a creditable 5-4.
In the following game, after his ill advised 7th move, Keres never had a chance. It was played in the 16th USSR Championship that was held in Moscow from November 10th to December 13th, 1948. Nineteen of the Soviet Union's top GMs were playing, among them were the participants of the Saltsjobaden Interzonal (1948), David Bronstein, Alexander Kotov, Andor Lilienthal, Igor Bondarevsky, Salo Flohr, Viacheslav Ragozin.