In his book Modern Chess Analysis which is about using chess engines in correspondence play, the late CCGM Robin Smith discusses how to use engines in opening analysis.
In his discussion on game database statistics, he advises caution because 1-the number of games may be too small to have any statistical meaning 2-the stats don’t take into accounts later improvements 3-they don’t take into account the playing styles of the players.  For example, playing Black against the King’s Gambit Accepted I would find stats meaningless because I never accept the gambit and try to avoid tactical melees. 4-the strength of the players is often omitted and 5-you must take into account the number of draws.  A 50% score in a line where White wins half of the games and loses half is not the same thing as a line where all of the games were drawn!  As he points out in a must win situation, the first scenario would be the way to go but if one is playing in a section to earn a master norm, the second scenario with a lot of draws may be the best course.
For stats to be meaningful he recommends having several hundreds of games available.  Also, it is important to select openings that fit one’s preferred style of play.  It’s also important to do your research to make sure that no recent developments have refuted your selected line of play.  White may have won 75% of the games in the db but a latrer improvement may have completely reversed the situation.  He advises that if there is not a sufficient number of games in the db then it is absolutely essential to play over the games to make sure the results weren’t influenced by mistakes later in the game.
In a recent CC game I faced a situation (I had Black in a King’s Gambit Declined) where we quickly reached a position with only three games in my database. The results were +1 -1 =1 and I had a choice of two different moves, both of which looked OK, but one line (where Black scored +1 -0 =1) lead to a position that was materially imbalanced and the engine was showing a small advantage to Black.  Because I am always skeptical of engine evaluations in this type of situation the question was, is that true? 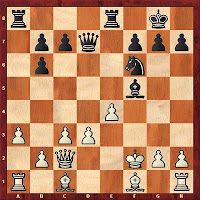 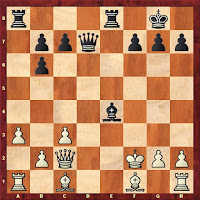 The position is evaluated as equal, but is it?  I thought White’s K looks safe and didn’t see any way for Black to work up a successful attack. I ran a couple of Shoot Outs from this position and the results were in White’s favor.  In the most interesting game White ended up with 2R’s + B vs. a Q + 3P’s with the engine showing a 2P advantage for White (there’s that material imbalance again) and White did indeed win. I concluded that it was best to avoid all these murky lines and chose the one move where Black lost.  It was a solid developing move and a quick examination of the game showed Black lost, not because of the opening, but because of mistakes later on.
Databases frequently give statistical analysis of opening moves but they are not always accurate and you must take into account a number of factors.  And as I’ve suggested in the past, playing CC these days in tournaments where engines are allowed (or even not allowed but used anyway by highly rated players on most sites) still requires you to do your homework.
Posted by Tartajubow at 11:50 AM