I reached the following position after 25.Bf2xb6 in a recently completed game on Lechenicher ScachServer: 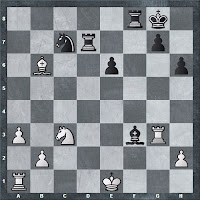 I was counting on my two passed P’s on the Q-side to win, but it wasn’t to be.  The critical position was reached at move 19.  Until that time we had been following a blitz match game between Kramnik and Kasparov played in London, 2000 which was drawn.
At move 19 I subjected the position to analysis with both the Houdini and latest version of the Fire engines.  My database had 5 games and in all of them 19.cxb6 resulted in a draw, but I did not want a draw so that was what prompted my decision to look for something else and I thought I had discovered it with 19.Ne2.  After all, it developed a piece, so how bad could it be?!  As a result of my decision to vary at move 19, we reached the above position which I reckoned I could win owing to the two passed P’s.  Indeed the engines all rated the position as equal.  As it turned out, as the game progressed, I kept watching the engine evaluations swing more and more in Black’s favor and I simply couldn’t find a way to save the game. Moral of the story:  I should have trusted the GM’s and accepted the draw.

Posted by Tartajubow at 4:53 PM