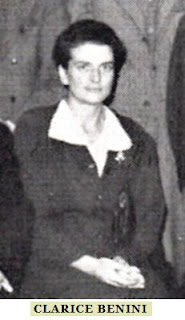 Clarice Benini (January 8, 1905 - September 8, 1976) was a WIM and was the strongest Italian female player of all time. Never married, she was always “Signorina Benini,” a moody and sober spinster whose only known amusement was to hang out with the men at the chess club who referred to her as “Benini girl” because she was unmarried.
Born in Florence, at the age of fifteen she found herself fatherless when Giuseppe Benini died while she was playing in a tournament. After the death of her parents she devoted herself to chess and became a close friend of Marquis Stefano Rosselli del Turco (1877-1947) who was also from Florence.
A dangerous attacker, she was always going after the opponent’s King, usually with exceptional creativity and violence. Take a look at her game against Chaude de Silans below!

She was the twice Italian women's champion (1938 and 1939). At the women's super-tournament at Semmering 1936, won by Sonja Graf, she finished 2nd.
Then she was a surprise at the Women's World Championship at Stockholm 1937, when she finished second behind Vera Menchik. This event took place during the 1937 Stockholm Olympiad.
In 1949/50, she finished 9th in the Women's World Championship in Moscow; it was won by Lyudmila Rudenko. The title had been vacant since the death of Vera Menchik in 1944.
For Benini the Moscow tournament was a long-awaited event after the war years during which time chess in Italy had suffered badly under the Italian fascist regime. Though her youth was gone and she had been threatened by her employer in the new post-fascist Italy with losing her job if she went to the Soviet Union, she didn’t think twice about it and undertook the fifteen-day train trip anyway. She traveled to Moscow at her own expense and when she arrived there it was 32 below zero.
By this time she no longer resembled the young woman who had surprised everyone in Sweden because she had been out of practice for years. As a result, she lost many games, but even so, the Soviets were impressed with her fighting spirit; Bronstein and Ragozin made special mention of her. It was clear that if the Benini had been well prepared, she would have been a dangerous contender.      She tied for 3rd-4th at Venice 1951 (WWCC zonal). In 1953/54 Benini achieved excellent results in the International Women's tournaments of Abbazia where she placed second with 13.5 points out of 17. At Gardone in 1956 she was unbeaten and finished first. Then at Amsterdam in 1957 she was undefeated and took another first. She finished 2nd at Beverwijk in 1958. 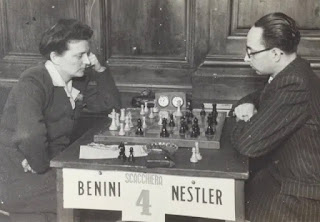 Benini continued to play in Italian women’s events and at the Florence chess club, but then had to abandon competitive activity in the mid-Sixties due to an eye disease.
She moved to the countryside where she owned a small house in Borgo Nuovo in northwestern Italy not far from the French and Swiss borders. It was there that she suffered an untimely end when an insane farmer murdered his wife and children and then murdered Benini who was his neighbor.