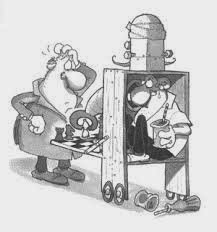 Correspondence Openings
Sometime back I downloaded the nearly 167,000 archived games from Lechenicher SchachServer then made a database containing 5951 games where both players were rated over 2300. I then made an opening book based on those games.
What openings give the best results? White’s scored best with: 1.d4, 1.Nf3, 1.c4 and 1.e4 respectively.
By far the most popular reply to 1.d4 was 1…Nf6, but the second most popular reply, 1…d5 was slightly better for Black. Other replies by Black did not have enough games to make the statistics significant.
Against 1.Nf3 the best results for Black were obtained with 1…d5 while the best chances against the English saw Black playing 1…e5
If White plays 1.e4 the scores were:

Posted by Tartajubow at 9:54 AM