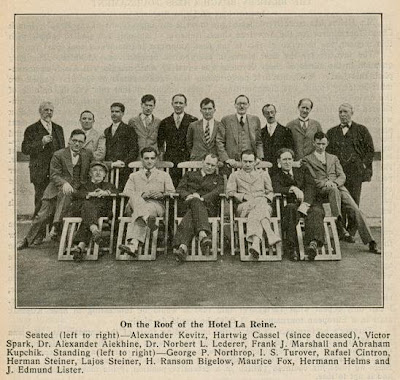 Held at the Hotel La Reine, Bradley Beach had been the site of the National Chess Federation championship in 1928 and had been considered as a possible site for a 1929 rematch between Alekhine and Capablanca for the World Championship. The organizers had considered an invitation to Vera Menchik which would have made her the first woman participant in an international men's tournament. For unknown reasons she did  not play in Bradley Beach although later in the year  As it happened, Menchik accomplished this at Carlsbad later that year where she finished last out of 22 players with +2 -17 =2.
Bradley Beach was Alekhine's first tournament after winning his world championship match with Capablanca.  Lajos Steiner had won the 1936-37 Australian championship but was ineligible for the title. He moved to Australia permanently a few years later prior to the outbreak of WWII.
Kupchik (born in Russia) had been living in the United States since 1903 when, as a child, his family had immigrated.  Kupchick, known for his horribly boring style, confined his play mostly to local events around New York. He played for the US in one Olympiad, in Warsaw 1935  where he won the bronze medal on board 3.  The US team won the gold medal that year.  Kupchick also played in the 1945 USA-USSR radio match, losing one game and drawing one against Makogonov.
Turover, born in Belgium, settled in the Washington, DC area after moving to the US and became a chess patron known for funding brilliancy prizes.  Maurice Fox was born in the Ukraine, grew up in England and moved to Canada in 1923.  He won the Canadian championship numerous times.
By the time this tournament was played, Frank Marshall’s future was behind him and he did not do well.  Alex Kevitz, a local master, was Manhattan Chess Club champion numerous times.
Herman Steiner had played on the US Olympiad team at The Hague the year before. Within a few years after Bradley Beach, Steiner moved to Los Angeles and wrote the chess column in the LA Times for over 20 years. He also founded a chess club attended by various movie stars. In the 1945 USA-USSR radio match, Steiner scored 1.5-.5 against Bondarevsky and so was the only US player with a plus score.
Rafael Cintron was champion of Puerto Rico, and with the tournament earned the distinction of being the first Puerto Rican to play in an international masters tournament.
Horace Bigelow, originally from Switzerland, moved to the US in the early 1920s.  He was a prominent member of the Manhattan Chess Club and was one of the organizers of the famous New York 1927 tournament that was won by Lasker ahead of Capablanca.  For many years Bigelow edited a chess column in the New York Evening Post and for Liberty magazine.
Alekhine won easily and the only blemish on his score was a draw with Kupchik.  Steiner had back-to-back draws in rounds 4 and 5 against Turover and Marshall and lost to Alekhine.  The real excitement came in the last round when Alekhine and Steiner met.  Alekhine was leading Steiner by a half point.  Alekhine defeated Steiner and so won first prize.

In this game Alex Kevitz uses the Budapest to defeat Marshall.  A good article on the Budapest is found in Wikipedia.