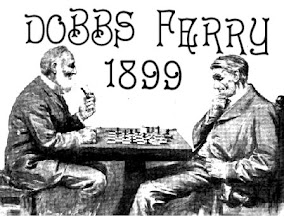 Finally, a short chess break! Between replacing drywall and flooring the waterproofers tore up, finishing the remodeling project and tending to the outside yard work, it's finally possible to spend some time blogging which is not only easier, but a lot cheaper!
I have been browsing through the 1899 editions of the American Chess Magazine. The magazine was published monthly by New York publisher William Borsodi. The magazine was one of several excellent US chess magazines published in the 1800s; others included Fiske's Chess Monthly, Brentano's Chess Monthly, Steinitz's International Chess Magazine and The Columbia Chess Chronicle. Borsodi's magazine enjoyed only a brief life from June 1897 to December 1899.
Each issue had about 60 pages and included a lot of photographs, chess news from home and abroad, tournament and match reports, games, problems, correspondence chess, obituaries, book reviews and brief biographies.
Over the July Fourth weekend in 1899 the magazine sponsored a tournament played at the Glen Tower Hotel in Dobbs Ferry, New York. The town (2010 population was 10,875) is located on the Hudson River about 25 miles north of New York City.
The hotel is gone now, but according to the July 3, 1898 issue of the New York Journal, the hotel, just 85 minutes from the city, was cool, comfortable and an ideal summer place where cultured and refined people could golf. Plus, the hotel featured four clay tennis courts, a gymnasium, a swimming pool and billiards and pool tables. There were magnificent roads that offered opportunities for driving and cycling (the American Chess Magazine even mentioned that the hotel was on a main road that made cycling up from New York City possible). Boating was also available.
If all that that wasn't enticing enough, the hotel had just added electric bells and...this is a big one...there was public sanitary plumbing throughout the hotel. Although the smaller than expected turnout was disappointing, the room in which the event was held was pleasant, airy and it had electric lights. The tournament room also housed a college library and had tables with filed with magazines, but American Chess Magazine lamented the fact that few of the players took advantage of any of that!
The final standings were:
1-2) Gustav Koehler 4.5
1-2) Eugene Delmar 4.5
3-5) Harold M. Phillips 3.0
3-5) James Hanham 3.0
3-5) Harry Zirn 3.0
6-7) E.M. Stoehr 2.0
6-7) Edward Behr 2.0
8) F.J. McRickhard 1.0
9-10) A.H. Bierwith 0.0
9-10) C. H. Pratt 0.0
One of the more interesting games from the event was between Hanham and Delmar. Major James M. Hanham was born in Woodville, Mississippi on January 4, 1840 and died December 30, 1923 in New York City.
Between 1884 and 1889 Hanham participated in many US and international tournaments. In the international tournaments he performed respectably but not spectacularly, usually finishing in the bottom half.
Although from the South, during the Civil War Hanham fought for the North. After the war, he moved to Manhattan and a writer in the New York Times, described him as "...a little, nervous man, who hates to sit still. He won his title during the war of the rebellion. He was one of the dudes of the tournament and was always dressed in the latest style, with a carefully polished silk hat and neatly trimmed beard."
Today he is remembered today for several innovations in the opening, particularly the Hanham Variation of the Philidor Defense. He has also been credited with inventing what today is known as the Grand Prix Attack against the Sicilian (1.e4 c5 2.Nc3 Nc6 3.f4), the Indian Opening (1.e4 e5 2.d3), and the Hanham Variation of the French Defense (1.e4 e6 2.d3), often referred to today as the King's Indian Attack.
For over 50 years Eugene Delmar (September 12, 1841 - February 22, 1909, 67 years old) was one of the leading players in the United States. A Brooklyn Chess Club champion, in 1876 he tied for 2nd place in the New York Clipper tournament. In 1879, he defeated Sam Loyd in a match in New York (+5-1=2). In 1885, he won the Manhattan Chess Club championship. In 1888, he defeated Samuel Lipschutz in a match (+5-3=0). In 1890, 1891, 1895 and 1897 he won the New York State Chess Association championship. In 1904, he finished in last place at Cambridge Springs (+3-9=3).