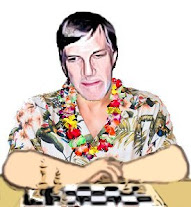 Back in February of last year I did a post titled Some Openings Should Be Avoided in which I mentioned that the weather was cold and snowy and I had been online playing goofy openings. Guess what? As mentioned in the post of the other day (February 18th) it seems things have not changed.
I was back at it...the wife was ensconced in her home office while I was nestled in the recliner inveighing against the nasty February weather and playing ten minute games online...using goofy openings of course.
One of my favorites is the Desprez Opening, or as it's sometimes called, the Kadas Opening. My preference is to use the name Hawaiian Orangutan Attack because it reminds me of nicer places to be in February. As I write this, it's 18 degrees here, the trees are bare and there is a foot of snow on the ground; in Honolulu it's sunny and for the next 10 days the temperature is going to hover around 80 degrees.
Whatever you call the opening, it's just plain bad, but I have managed to "improve" on its "badness", so to speak, by making it even worse. For this reason I would like to call my innovation the "Tartajubow Variation." It begins 1.h4 e5 2.Rh3. It's been played before, but I have used it in a lot of online games and hopefully this post will help popularize it.
If I wanted to write a book on it I could pick a bunch of badly played games, throw in lots of faulty analysis and hype it as an opening in which you can immediately take your opponent out of the book and make him think on his own. Plus, there's a lot of tactical play and tactics win games. It would sell.