Rowena Mary Bruce (May 15, 1919 – September 24, 1999), nee Dew, was an English WIM who was an eleven-time winner of the British Women's Championship (1937, 1950, 1951, 1954, 1955, 1959, 1960, 1962, 1963, 1967 and 1969). In 1935, she won the FIDE World Girls Championship and in 1952 she participated in the Women's Candidates Tournament where she finished 12th. She also represented England in the Women's Olympiads. From the end of the 1930s to the end of the 1960s, she was one of England's strongest lady players.
She was born in Plymouth, the youngest child of Harvey and Mary Dew. One brother, Clement, worked in electronics and lived to the age of 90. Her other brother, Lanning, was an artist and pianist who died at 50.
Rowena’s mother had been a long time member of the Plymouth Chess Club and at one time was Devon Ladies Champion and played in the British Championship. She tried to interest her sons in the game, but they showed little interest. Rowena, however, took an early interest in chess and by the time she was 10 her mother realized that her talent was such that she needed someone of greater ability to bring out her talent. That’s when she approached the 22-year old Ronald Bruce (1903–1991), a strong Portsmouth club player, to give her two lessons a week.
That began a partnership that was to last 65 years. In 1940 she married Bruce and they remained married until his death. Under Bruce’s tutelage within 9 years she had become FIDE World Girls Champion. Rowena attended a private all-girl establishment.
Her secondary education was interrupted when she had a mastoidectomy. A mastoidectomy is an operation that removes part of the bone from behind the ear. It’s done is because of an infection or cholesteatoma (a skin growth which often forms a cyst) that spreads to the mastoid bone. The operation removes the diseased part of the mastoid bone.
The surgery resulted in the loss of a year’s schooling and her suffering with tinnitus. During that time she concentrated on her chess training and her music; she played the cello and became Principal Cellist with the Plymouth Orchestral Society.
In 1935 she competed (under the name Rowena Dew as at the age of 16 she was not married) in FIDE’s 10th Annual Girls’ Open Championship. It really wasn’t much of a tournament though...there were only 12 entrants, all from the UK. In 1937 she and her mother played in the British Championships. Rowena won the British Ladies Championship with an impressive 10-1.
In the 1939 Ladies Championship Rowena was upstaged by 13 year old Elaine Saunders who scored an undefeated 10-1 while Rowena was only able to score a minus one.
The war interrupted her chess career and throughout the war she worked in the Women's Voluntary Service (WVS). The service, founded in 1938, was originally set up to train women to be able to help with air raid precautions, but soon developed into running emergency rest centers feeding, giving first aid and assisting with the evacuation and billeting of children. One interesting activity was spinning and knitting dog hair garments. The garments were described as being “warm and hard wearing.”
She and Bruce were married in 1940. In August 1945 she gave birth to a son who died after 10 days and she was advised that it would be unwise to try again.
After the war her chess activity resumed with local club events. In June of 1946 she and Eileen Tranmer were part of the British team in the Anglo-Soviet Radio match. Tranmer lost both of her games against Bykova and Rowena also lost both her games against Rudenko. 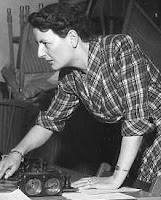 She was 53 years old when in November 1972, while playing in the East European Zonal Tournament held near Sofia, Bulgaria, she suddenly slumped over the board in round 2 as a result of suffering a cerebral hemorrhage.
She spent several weeks in intensive care. When well enough she was flown to London where an ambulance that took to a hospital. After several weeks an ambulance took her home. Her right side was paralyzed, she was unable to speak and saliva constantly dripped from her mouth. By sheer will power she taught herself to speak and walk again. Her recovery was never complete and she walked with a limp and she was never able to play her cello again.
In 1974 she was able to begin playing chess again though not up the level at which she had previously played. In 1974 she returned to her annual participation in the British Ladies Championship, playing up to the mid-1980s, though she generally struggled to reach a 50 percent score. In those later days she was often happy to settle for quiet draw claiming, “I don’t mind the draws – it’s the losses I can’t stand!”
In addition to their chess activities, she and her husband were expert and regular bridge players, though on a strictly non-competitive basis. Her husband died at the age of 86. Rowena continued to live in the family home. She began to suffer a series of mini-strokes and died at home on April 24, 1999 at the age of 84.
See my post on Fenny Heemskerk HERE.