The Disappearance of David A. Mitchell 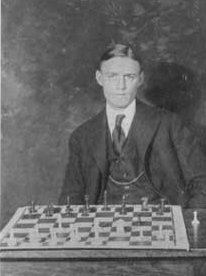 On Dec 27, 1883 David A. Mitchell was born in Philadelphia and was briefly one of the country’s most prominent chess writers. Brief because sometime in June 1926, at age 42 he vanished and was never seen again. Newspapers of the day said he had been mentally ill and possibly committed suicide, but that was speculation because his body was never found.
He wrote two beginners’ books, Mitchell’s Guide to the Game of Chess and another book titled simply Chess. Mitchell’s Guide to the Game of Chess contained what may be some of the worst advice ever handed down: ‘When in doubt, move the King’.  Edward Lasker revised it in 1941.
In January 1926 the Bulletin magazine wrote, "David A. Mitchell, former chess editor of the Philadelphia Ledger, who has been residing in New England for his health, has moved to Bermuda, where, on Harrington Sound, he finds the climate very mild and expects to spend the winter there."
Not long after that newspapers reported Mitchell had mysteriously disappeared. Mitchell had returned home from Bermuda in March and on the night of his disappearance on a Sunday he gave his neighbor a check for $25, saying it was all he had and he would not need any more. The Philadelphia] Ledger reported, “Northport, Me., June 2 –David A. Mitchell, formerly of Philadelphia, and author of several books on chess, has been missing from his summer home on Temple Heights here since Sunday night. A searching party was organized by Sheriff Frank D. Littlefield today after a note was found at the house.”
In the June 3, 1926 edition The Philadelphia Inquirer  carried the following article: "BELFAST, Me., June 2 – Sheriff Frank A. Littlefield and a posse searched the woods on Mount Percival, Northport, Maine, for David A. Mitchell, a Philadelphia newspaper man, who has for the past few years occupied a home near the mountain. Mitchell was last seen Sunday night when he told callers at his home it was the last time they would ever see him and that he was suffering mentally. He had talked of hearing beautiful but mysterious music, and on a card found on his desk was written, 'If he don’t stop that machine I’ll go insane.' Mitchell spent the past winter in Bermuda, returning in March to Northport, and is said to be despondent over the death of his mother a few weeks ago. He has one brother, William L. Mitchell, of Philadelphia. While his house was in perfect order, he took none of his belongings and it is feared he may have drowned himself in Penobscot Bay."
And that's all that is known about what happened to him.  I was unable to locate any of his games, but did find this problem: 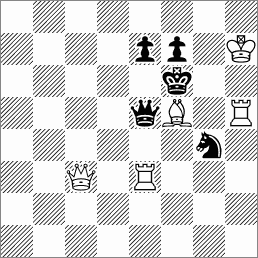