Most chess players remember Jacqueline Piatigorsky (born November 6, 1911) only as the lady behind the fiasco that ended the 1961 Reshevsky-Fischer match.  What happened was she and her husband had established the Piatigorsky Foundation which helped sponsor chess in public schools and chess for underpriveledged and disabled children but its primarily purpose was to support the Piatagorsky Cup Tournament.   However, the first competition under the sponsorship of the Piatigorsky Foundation was the Reshevsky-Fischer.  The match was to be 16 games with the first 4 played in New York City and the next 8 played in Los Angeles and the last 4 back in New York City. There had been difficulty in setting up a time for the 12th game because as an Orthodox Jew, Reshevsky couldn't play on the Sabbath, so the game was scheduled after sundown, (9:00 pm).  Later Mrs. Piatigorsky realized that starting by at 9 pm, the game wouldn't end until 2 am. which she thought was too late.


The committee rescheduled the game to start at 1:30 pm the next day, but Mrs. Piatigorsky wanted to see the game and this starting time would conflict with a musical performance her husband was giving.   So, on her own, she scheduled the game for 11 am that morning. Fischer, who would not play that early in the morning, became infuriated that she had consulted neither him nor Reshevsky, threw one of his hissy fits and using language that was fit for the gutter, stormed out in protest, Reshevsky wisely said nothing and was declared the winner, collected his prize money and returned home.  The match was tied at 5½-5½ going into the disputed game.

For an interesting article written by Mrs. Piatigorsky written when she was  90 years, visit  HERE. 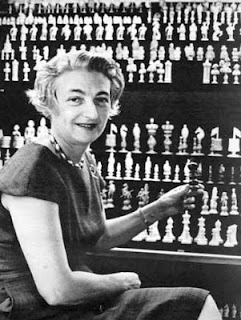 Born Jacqueline Rothschild she had every advantage growing up but she led a secluded childhood, with no friends, was dominated by sadistic or uncaring nannies, saddened by parents who would visit her and her siblings only rarely, she claimed to have never have been out alone until she became an adult.
She was taught chess by an English nurse when she was 6 years old and convalescing from peridonitis, but she was mostly interested in tennis and golf. She had a circle of acquaintances and played chess with people like Marcel Duchamp and Sergei Prokofiev. Prokofiev was a strong player who once defeated Capablanca in a simul.  Prokofiev  partnered with Mrs. Piatigorsky in bridge and would often make demeaning remarks against her during their games. They only played two games of chess.  The first was a draw but she won the second  and Prokofiev refused to play her again.
She married her husband, Gregor, the renowned cellist in 1937.  Being Jews, they fled France for the United States when it threatened to fall under Nazi control.  Steiner died suddenly in 1955 right in the middle of the state championship.  He had a club called the Hollywood Chess Group to which many celebrities belonged, including a lot of women players.  After Steiner’s death Mrs. Piatigorky took over the club that was renamed the Herman Steiner Chess Club in his memory. In 1956 the club hosted the California Women's Championship.   Mrs. Piatigorsky finished third behind Sonja Graf-Stevenson and Lina Grumette.
In 1957 she took part in the first Women's Chess Olympiad played at Emmens, Netherlands and scored a very respectable 6 wins, 3 draws and 2 loses. In individual games, she beat Merete Haahr (Danish Women's Chess Champion in 1952, 1958, 1959, 1962, 1967, 1970 and 1975), Beth Cassidy of Ireland, R.P Foggie (the 1955 Scottish Women's Chess Champion) twice, Berta Zebinger (the Austrian Women's Champion in 1955 and shared in 1967), Ms. Welter of Luxembourg. She drew against Miroslawa Litmanowicz (the 1968 Polish Women's Champion-to-be), Éva Karakas (7 time Hungarian Women's Chess Champion), and Antonia Ivanova (6 time Bulgarian Wome's Chess Champion in 1951, 1952, 1954, 1957, 1958 and 1967). She lost to Kveta Eretova of the Czech Republic and to Ursula Altrichter (East German Women's Chess Champion in 1954). She played second board and won the bronze medal.
The First Piatigorsky Cup Tournament was held in 1963. Fischer was invited but demanded a $2000 appearance fee but was turned down so didn’t play.  Petrosian and Keres shared first place Najdorf, Panno, Gligoric, Olafsson,Benko and Reshevsky also participated. She seemed to have really disliked Fischer, but because his standing in the chess world, she also invited him to the 2nd Piatigorsky Cup Tournament in 1966. To her surprise, Fischer accepted without demanding an appearance fee.  She wrote, "in the Second Piatigorsky Cup, Fischer played under the same conditions as everyone else. I think I was the first person ever to stand up to him."   In this tournament Fischer finished the first half of the double round event in last place, then in a surprising surge, finished in second place a half point behind Spassky.
This tournament was unique for another reason:  Mrs. Piatigorsky wrote, "Until then, the only way the public could follow the games was by setting up magnetic boards and having youngsters run back and forth, moving pieces on the board to adjust to each new position. It was cumbersome. So I invented a new system with overhead projectors and electric clocks so the public could not only follow the games comfortably, but also the time control."
Sidebar:  For an interesting story on the chess sets used in the Piatigorsky tournaments, go HERE.  Visit HERE for a Sports Illustrated article.
Mrs. Piatigorsky was not only a woman’s chess champion but a tennis champion, author, sculptor and a member of the Rothschild banking family of France. The daughter of the enormously wealthy and influential banker, Édouard Alphonse de Rothschild, and Germaine Alice Halphen. She was born in Paris.
She and her husband were also patrons of the arts and in 1985 created an endowment for the New England Conservatory of Music to provide the "New England Conservatory/Piatigorsky Artist Award" which gave the recipient a cash prize and a series of concert engagements.  In her forties she developed an interest in sculpting and arranged to take lessons from a professional.  A Los Angeles area gallery put on the first exhibition of her works in 1976. Widowed at the age of sixty-five, she continued working and playing tennis into her nineties and remained active in sculpting.
Sam Sloan wrote an interesting article describing his 1965 meeting with her which you can read HERE.  I was able to verify that Mrs. Piatigorsky was still living in 2008 and was unable to find any obituary, so assume she is, at the age of 100, still living! A fascinating woman.

Check out the instructive way in which she defeats many time US Women’s champion Mona Karff in the following game.

Posted by Tartajubow at 4:18 PM 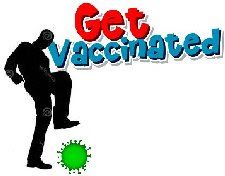 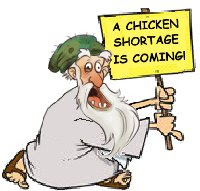 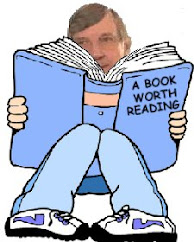 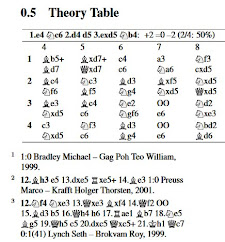 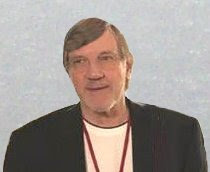