When it was time for the Fifth US Championship (1944-45) several of the top players were either in the military or working jobs that left little time for chess. Also, the young players before the war were now approaching middle age and many were no longer eager to devote the time and energy to compete in the championship tournament. As a result, this was one of the weakest championship tournaments to be held in many years. Only one or two players of grandmaster strength had even competed in several years and many of the tailenders were much weaker than those of the 1930’s. Reshevsky was studying for his examinations to become a certified public accountant and passed up the1944 tournament. Denker had been slowly improving from his 12th place finish in 1936 to equal sixth in 1940 and then a tie for third behind Kashdan and Reshevsky in 1942.

Fine played in this event and was expected to win, in the absence of Reshevsky, but Arnold Denker, Playing the tournament of his life defeated Fine in their individual encounter.
The favorite was Fine, with Steiner, Horowitz, Denker and Pinkus given only a remote chance of upsetting him. Kashdan, after making plans to play, he had to withdraw on doctor's orders. The remaining players were barely of master strength.

The finals consisted of those who qualified from the preliminaries. Only 18 players entered the preliminaries which was far fewer than in pre-war years. As a result, Louis
Persinger, a violin teacher with many famous students and who was a member of the Juilliard School of Music faculty qualified. Persinger was nowhere near a master and scored only one draw in 17 games in the finals

Not surprisingly, the top five players were Fine, Steiner, Pinkus, Horowitz and Denker. They all began with a string of victories and were soon far ahead of the field. Only George Shainswit managed to stay fairly close, but even he finished three points behind the leaders.

The initial pace was set by Denker and Horowitz with 3-0 scores while Fine got into
trouble in the very first round against Albert Pinkus and barely managed to save a lost game.
The seventh-round meeting of the two was such that Denker could afford a draw but Fine could not and their encounter is the featured game.

After Fine’s loss to Denker there were still ten rounds to go and several moderately strong players for Denker to face. In the next round he faced Weaver Adams and got a very bad position and offered a draw several times. Adams was unable to find a win and ended up blundering away the game. After that close call Denker reeled off nine straight wins before drawing with George Shainswit.
Denker did have a close call in the 12th round against an amateur named Aaron Rothman. Rothman had been massacred in an earlier game by Fine in 15 moves. It was so bad Rothman said the game reminded him of a recent gangland assassination of a mob boss that had taken place in the same hotel. Rothman got a great game against Denker, but had one of those positions with so many good moves he ended up playing none of them and lost. Denker scored an amazing 14.5 points in 15 rounds and so coasted to victory by accepting early draws in his last two games. 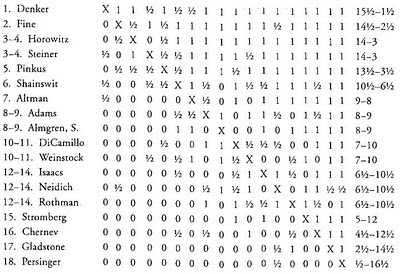 Posted by Tartajubow at 2:01 PM